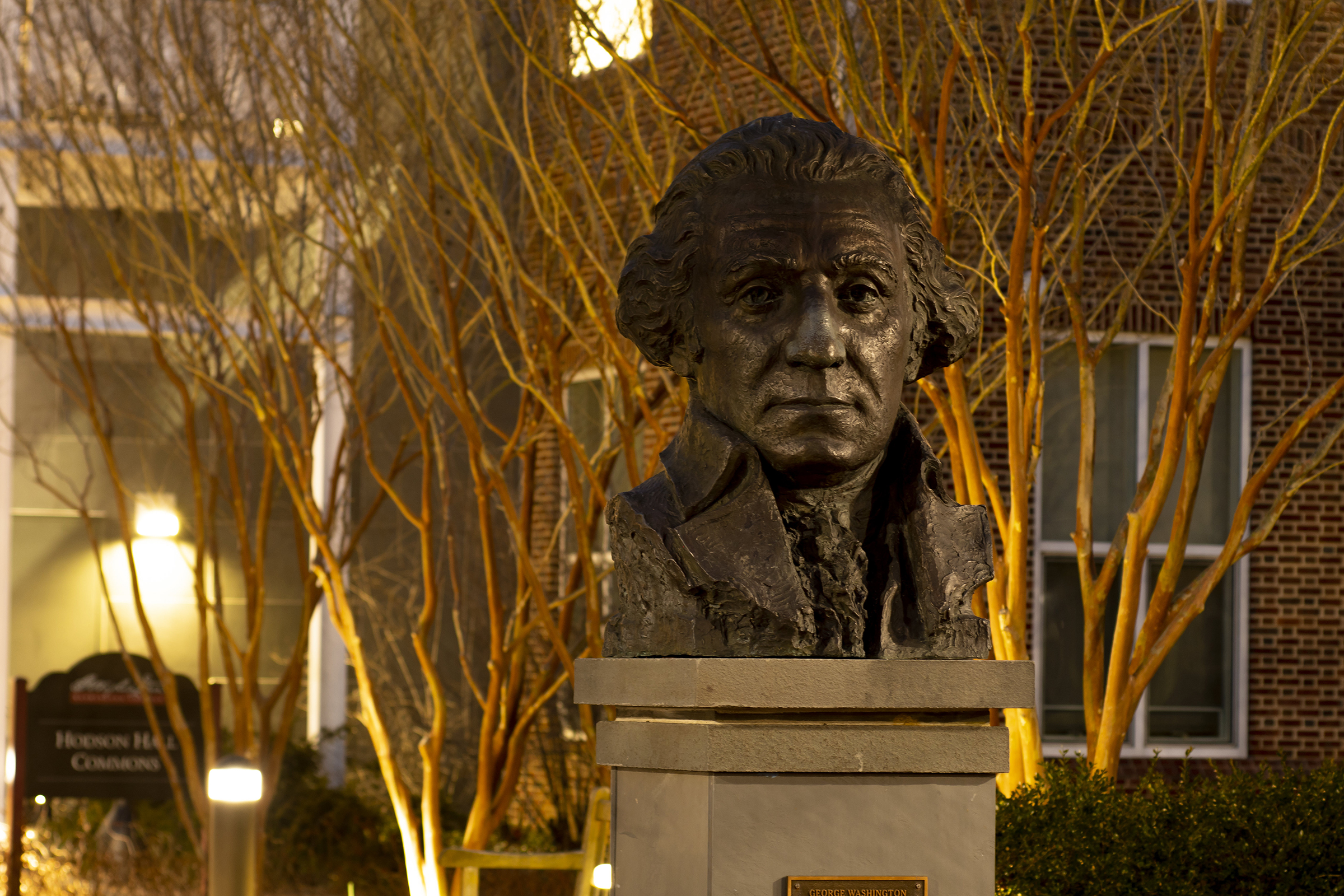 Associate Professor of History Ken Miller offers a portrait of George Washington that acknowledges his iconic stature in early America, as well as his prejudices against people of color.

A Hero for his Time? In 1939, Washington College President Gilbert Mead commissioned artist M. Paul-Roche to create the painting above, depicting George Washington's visit to campus in May 1784. The scene—with dignitaries, community members, and enslaved workers looking on— is based upon College President William Smith's description of the event, at which Washington took his seat on the Board of Visitors and Governors. The painting, which once hung in Bunting Library and, later, outside the President's Office, has been lost.

In 1782, Washington College, a newly chartered institution of higher learning nestled on Maryland’s Eastern Shore, welcomed its inaugural class to Chestertown. Taking the name of the patriot commander-in-chief who only months before had orchestrated the decisive American triumph at Yorktown, the fledgling institution became the first college established in the newly independent United States. General Washington solidified his connection to the college by pledging 50 guineas to the institution and joining its Board of Visitors and Governors. To most observers of the momentous events of the 1770s and 1780s, the budding school’s adoption of George Washington as its founding patron made perfect sense. For his many American admirers, Washington was the hero of the long and costly Revolutionary War that had successfully sealed their new nation’s bitterly contested independence. To the tens of thousands of Americans eager for change, revolutionary ideals and rhetoric fed visions of a more just, more equitable, and potentially more inclusive world than the one they’d known just a few years earlier. That the College’s founders thus chose to affiliate their enterprise with the nationally celebrated “father of the country”—at a moment when his and the Revolution’s legacies remained highly fluid—was hardly surprising.

Implicated in the Institution of Slavery

And yet, within a few generations of its founding, the nation’s revolutionary idealism gave way to a westward surge that dispossessed and displaced countless Native peoples and to an intensified commitment to slavery among the southern states that fueled the spread of multiplying farms and plantations worked by gangs of enslaved men and women in a steadily expanding southwestern arc. Through the first half of the nineteenth century, the young republic remained haunted by the unsettling duality between slavery and freedom, oppression and opportunity. Like the nation itself, Washington reflected that tension. During his life and long after his death, the first of the founders stood deeply implicated in the institution of American slavery. As a member of Virginia’s planter elite, Washington had a long and intimate connection to the institution, acquiring his first ten slaves at the age of eleven via inheritance. By the time of his death nearly 60 years later, he had amassed an 8,000-acre estate consisting of multiple farms worked by upwards of three hundred black slaves under the vigilant supervision of a team of white overseers. Prizing efficiency, Washington proved a demanding master. Like his fellow planters, he approached his slaves first and foremost as property to be driven for profit.

Today, admirers of Washington answer his multiplying critics by noting that, unlike fellow founders such as Thomas Jefferson, he ultimately freed his slaves under the provisions of his will. While that’s partly true, the full story remains more complicated. Washington’s personal experiences during the Revolution left him newly critical of the institution and increasingly sympathetic to the plight of the tens of thousands of enslaved Americans under his and others’ control. Animated by revolutionary principles and plagued by the glaring contradiction arising from his continued support of chattel slavery, Washington joined a minority of Chesapeake planters by privately manumitting the more than one hundred and fifty personally owned slaves who had not come to Mount Vernon compliments of his wife’s dower. But he did so conditionally, stipulating that they would only become free following the death of his wife. When she died three years later, scores of Mount Vernon’s dower slaves returned to the control of her family and remained in bondage.

Falling Short of His Private Convictions

What’s more, despite his obvious sympathies, Washington’s private and public actions continually compromised his much-vaunted integrity. In 1793, his administration oversaw the implementation of the nation’s first federal fugitive slave law, which required states, both free and slave, to return black runaways to their white masters. From the end of the Revolutionary War into the 1790s, he also remained determined to reclaim fugitives from his personal holdings. While president, he cynically evaded Pennsylvania’s newly instituted gradual emancipation act by shuttling his servants between the nation’s capital of Philadelphia and his private estate in Virginia in a manner explicitly designed to thwart their lawful liberation. But what’s most noteworthy is that for all his considerable influence among his fellow citizens, he took no substantive public steps to abolish—at either the state or national level—the institution that he privately denounced. Though the first president obviously felt morally conflicted and merits praise for liberating the slaves under his exclusive legal control, he ultimately fell short of his own convictions. It’s not surprising, then, that like so many members of the founding generation, Washington has not aged particularly well.

If his contemporaries could thus be excused for what too often amounted to uncritical adulation, the present demands a full and candid reevaluation of his life and legacy, especially at a time of unprecedented national reckoning for past and present racial injustices and in a place such as Washington College, which, like its namesake, has its own troubled racial history, with the institution’s formative development intertwined with slavery. But while any such reappraisal must take pains to acknowledge Washington’s well-documented connections to historic injustices, it must also recognize his rightful association with the Revolution, nationhood, and the republic’s most lofty and cherished founding principles. Some of the most meaningful, forward-looking reform in U.S. history has occurred when diverse groups have honored the nation’s better angels by joining together in the face of organized opposition to translate these timeless, universal ideals into lived experience for numbers of long-suffering Americans, whether such progress took the form of the 1863 Emancipation Proclamation, the constitutional amendments of the short-lived Reconstruction era, or the culminating civil rights’ legislation of the mid-1960s. Alas, entirely too often, generations of Americans, like the founders before them, have failed to live up to their own most celebrated ideals. Which is why, well over 200 years after that historic rebellion that conjured up visions of a new and better America, the Revolution’s full promise remains unfulfilled and the long struggle to come to terms with and make amends for past and present wrongs—to make real that more perfect union for ever larger numbers of Americans—continues, with the nation’s founding principles as a guiding light.