The Gerda Blumenthal Phi Beta Kappa Award is awarded annually to a rising sophomore or junior to support special scholarly work in the humanities. 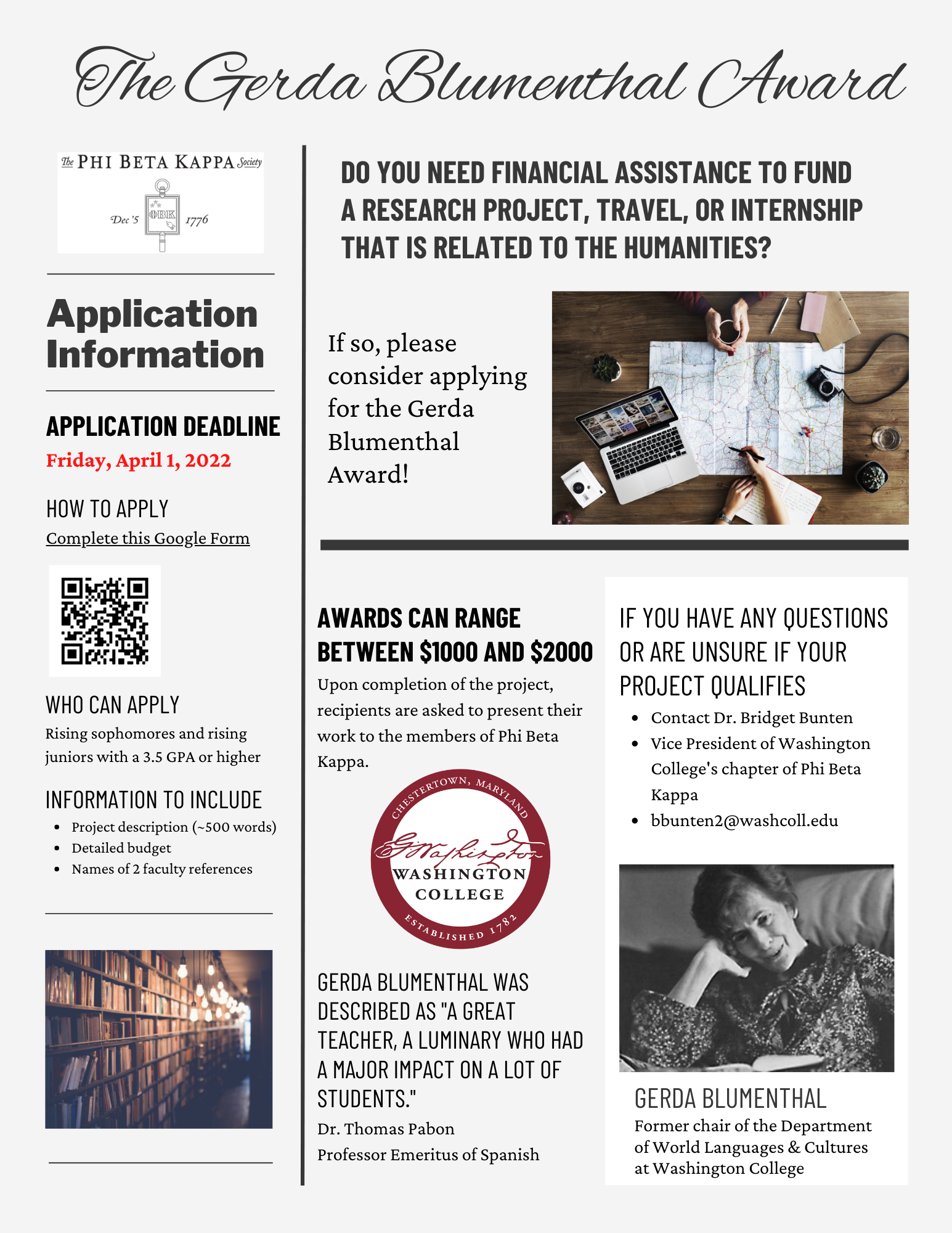 The Gerda Blumenthal Phi Beta Kappa Award is awarded annually to a rising sophomore or junior to support special scholarly work in the humanities. Depending on the availability of funds and amount requested, award money will range between $800 and $1200. Upon completion of the project, recipients will present their projects to the members of Phi Beta Kappa.

This award is made possible by a gift from Dr. Robert Kirkwood, former Dean of the College, who established the prize as a way to honor the memory of Dr. Gerda Blumenthal, a former Professor of Modern Languages at Washington College and member of Phi Beta Kappa (Hunter College, 1945). She has been described by Dr. Thomas Pabon, Professor of Spanish Emeritus, as “a great teacher, a luminary who had a major impact on a lot of students.” This award carries on Dr. Blumenthal’s legacy by supporting students in their pursuit of intellectual excellence.

Dr. Blumenthal was born in Berlin and immigrated to the US with her family in 1939. She studied at Hunter College, where she became a member of Phi Beta Kappa. She later earned a Master’s degree and a PhD from Columbia University. Dr. Blumenthal began teaching World Literature and French at Washington College in 1955 and later served as chair of the Department of Modern Languages. At the College, she earned a reputation as an excellent and inspiring teacher and received the first Lindback Award for Distinguished Teaching in 1964. She continued her teaching career as Professor of French and Comparative Literature at Catholic University before retiring in 1988. Dr. Blumenthal passed away in 2004 at the age of 80.

An expert in twentieth-century French literature, Dr. Blumenthal published several articles and three critically-acclaimed books: André Malraux: The Conquest of Dread (1960) and The Poetic Imagination of Georges Bernanos (1965) and Thresholds: A Study of Proust (1984).