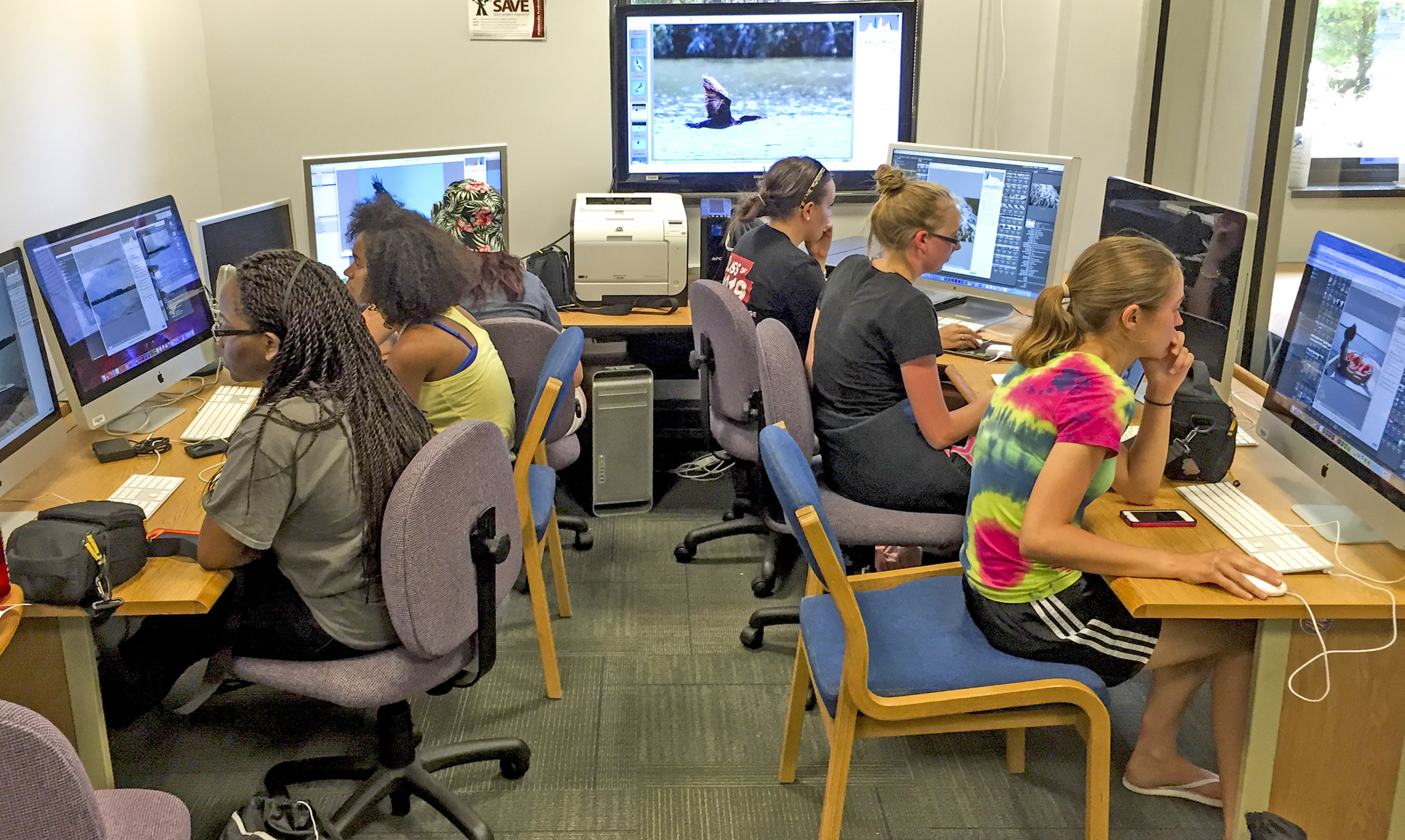 CMS 101 Introduction to Communication & Media Studies. This course introduces core issues in communication and media studies,   ranging from theories and models of communication, the relationship between media and society, and history/technology/trends in newspapers, radio, television, film, electronic and digital technologies, & advertising. Key problems and paradigms are explored through materials drawn from academic scholarship, popular press, and multimedia.

CMS 150 Public Speaking. Class presentations, job interviews, internships-pubic speaking is part of our everyday life. This course teaches students the main principles of public speaking; practice in composition, delivery, and criticism of informative, persuasive, and entertaining speeches. Particular attention is paid to speaking with media and public speaking in a digital world. Everyone needs to know how to do it and the sooner you learn the better!

CMS 194 10 Video Production I.  An introduction to the fundamentals of equipment, lighting, sound, cinematography, and editing (Final Cut Pro and After Effects) for video production. Student will produce their own videographic work over the course of the semester. 2 credit practicum

CMS 200 World Cinema I. Understanding contemporary moving image culture and media—from YouTube, to Snapchat, to IMAX—requires a working understanding of visual analysis. The history of cinema provides the best way to comprehend and contextualize the moving image in popular culture. This course is a history of world cinema from film dawn to post WWII cinema (roughly 1895-1960) which present the films of this era in a way that understands them as integral works within an historical visual landscape. This course emphasizes understanding filmmaking form (how to watch a movie), aesthetics, and filmmaking techniques, and analyzing content/narrative. Required lab is for film screenings.

CMS 201 Contemporary Popular Film and Television. This course teaches students to develop a critical understanding of the role of popular movies and television in their own lives and in U.S. culture. The course looks at issues of the relationship of media to social violence, gender identities, sexual identities, technology, minority cultures, and the role of the U.S. media globally. Required lab is for film and television screenings.

CMS 202 World Cinema II. A continuation of World Cinema I, this course looks at film history roughly from 1960-present, presenting various modes of international cinema production and its contemporary evolution as closely interconnected. Covering the US, the UK, Italy, Czech, Senegal, Algeria, Japan, India, and France, we place an emphasis on hybrids of all these ‘national’ styles, as well as challenging the politically charged notion of national cinema itself. Secondly, we will explore how changes in global contemporary filmmaking evolved the US film industry and helped to challenge Hollywood’s global dominance. Thirdly, we will trace how new industrial channels exposed regional and ‘minor’ film industries to global audiences. Required lab is for film screenings. Prerequisite of World Cinema I or permission of the instructor

CMS 205 Persuasion: The User Experience. This course examines persuasion as a communicative strategy. Attempts at persuasion surround us everywhere: in the advertisements we see, in the messages we receive on social media, in the debates we have over meals, and even in the layout of our grocery stores. Students will consider the history of persuasion in mediated and non-mediated contexts and the ways in which technology keeps users clicking, watching, and participating. In addition to practicing critical analysis of persuasive messages, this class will encourage the production of original persuasive content that is both effective and ethical.

CMS 220 Global Media and Technology. This course will examine the structures and impacts of global communication networks. We will consider the economic, cultural, political, technical, and environmental consequences of increasingly globalized media. We will discuss early work in the field of international communications and continue through to contemporary discussions of global media networks. Throughout the semester, we will examine how different entities wield power and assert influence in this global media landscape and how digital technologies can be used to both challenge and reaffirm those existing hierarchies.

CMS 250 Intermediate Communication and Media Theory. Theory may seem like a scary word, but theory helps us to make sense of our world. Theories shape how we understand reality, relationships, and the media around us, and helps us to create media of our own. Theory tells us more about how we communicate, aids in holistic comprehension of our media landscape, and prepares us for lives consciously lived. This course exposes students to the major theories of communication and media studies, their application to the academic and professional inquiry in the field, and their importance in everyday life. The course also teaches students to write in and across the field, and prepares them for upper level critical, analytical, and theoretical based communication and media studies thinking and research. Students who take this class must have taken CMS 101 or have explicit permission from the professor to enroll. Not recommended for first year students.

CMS 300 Creative and Information Economies. This course introduces students to the political economic approach to communication and media studies and considers its application to specific media and entertainment industries. To understand media content, media technologies, and the economies built around them, we must look more deeply at the effects commercialization and corporate concentration have on these systems. In this course, we will consider issues like privacy, citizenship, globalization, labor, alternative media, digital media, and the ways in which we construct shared culture through media.

CMS 301 Research Methods in Communication and Media Studies. What do Buzzfeed quizzes and the U.S. Census have in common? They’re both surveys constructed through a specific methodological approach. Whether you are trying to help the Internet determine what Stranger Things character they are or counting the U.S. population, you need a method to build your project on. This course introduces students to the basic quantitative, qualitative, interpretive, rhetorical, and critical research methods used in communication and media studies. Students can expect a project-based class applicable to majors across the social sciences and humanities that uses popular culture, current events, and multimedia to become methodological experts. Students who take this class must have taken CMS 250 or have explicit permission from the professor to enroll.

CMS 394/POL 334 Media and Politics. This course will explore the role of the media in politics from various   perspectives, providing an overview of the following: the history of the   media in the United States; the legal issues that relate to the media;   the impact that the media have on public opinion; the substance (or lack of substance) of the media’s coverage of the news, government   and elections; biases of the news media; political campaign   advertising; alternative and newly developing forms of media; and the increasing conglomeration of the news media through mergers. Throughout the course, these issue areas will be discussed in a larger context involving questions of freedom, representation, and political participation.

CMS/FRS/ILC/HMN 394 French Film and Culture. This course combines film, culture, and film culture to expose students   to a holistic construction of French history, culture, language, and   politics. Organized thematically, students will study a diverse range of filmic and cultural examples, developing interconnections across time periods, social, political, and artistic movements. Topics include, but are not limited to, Paris as city, film noir, colonialism and post-colonialism, surrealism, immigration, and everyday French life. Films and readings will be supplemented by attendance at the French Film Festival in Richmond, Virginia. Wednesday lab is for film screenings; attendance is required. It is recommended, although not required, that students have had some exposure to film studies prior to taking this course.

CMS 401 Film Theory. This course engages with, uses, and challenges various theoretical ideas and approaches to film. We will address questions such as: What is cinema, and what are film studies? How do we relate to and interact with films? What are the relationships among film and the larger global society? We will discuss the historical and cultural context in which particular theories emerged and learn the language of idea-inflected film criticism. Recommended that students have taken at least one film class prior; sophomore or higher strongly recommended

CMS 450 CMS Senior Seminar.The CMS Senior Seminar fosters rigorous reflection on students’ CMS training while exposing them to new and cutting-edge developments in the field. Broadly constructed across the CMS major concentrations, the course trains students in higher-order intellectual production in anticipation of and preparation for embarking on their Senior Capstone Experience. Prereq: must be a CMS major with Senior standing

CMS 494/ANT 420 Media and Power. How are mediated representations created, how they have been manipulated historically to oppress or devalue certain groups, and how they can be contested? Working from the idea that mediated images are constructed through power and its various functions, this class will explore how people reclaim their identities—and their own power—through revising or even appropriating representations that have been made of them. Special attention will be paid to how media has been used as an activist strategy to speak truth to power around issues of racial and ethnic discrimination, bodily integrity and anti-harassment, LGBT and queer equality, and economic justice in a global context.

Senior Capstone Experience (SCE). The Senior Capstone Experience is an intensive research project on a topic chosen by the student and guided by a faculty mentor. It hones research, analytic, and writing skills developed during four years of study. Students usually complete the Capstone in the spring of their senior year. However, planning for the SCE begins in the spring of their junior year with the submission of an SCE application during advising week. The Capstone receives a mark of Pass, Fail, or Honors.