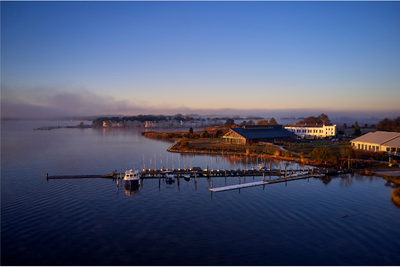 Andy Harris (R) holds a lead of seven percentage points, 45% to 38%, over his opponent Heather Mizeur (D) in the race to represent the district in the House of Representatives. The Ballot Initiative on a Maryland Constitutional Amendment to legalize the use of Cannabis has overwhelming support, with 74% of likely 1st district voters in favor, 21% in opposition, and only 4% undecided.

The Eastern Shore Public Opinion Poll was conducted by Washington College Assistant Professor of Political Science Flavio Rogerio Hickel Jr. between October 28 and November 1. Hickel, who was recently named a 2022-23 Public Religion Research Institute (PRRI) Public Fellow, is also an expert on voting trends within the Latinx community. He earned his Ph.D. from Rutgers University in 2016 and studies American political institutions, identity politics and public opinion.

In addition to understanding political attitudes among Eastern Shore voters, the survey polled residents to better understand how they engage civically through volunteer work, voter engagement, activism or philanthropy in an effort will provide reliable information regarding a range of citizen preferences to elected representatives, community leaders and the general public.

The full results of the poll can be found at washcoll.edu/eastern-shore-poll.

Founded in 1782, Washington College is the nation’s first liberal arts institution and the tenth oldest college in the nation. Enrolling approximately 1,100 undergraduates from more than 35 states and a dozen nations, Washington is known for outstanding academics with an emphasis on hands-on, experiential learning across more than 40 multidisciplinary areas of study. The College is home to nationally recognized academic centers in the environment, writing and the Starr Center for the Study of the American Experience. In addition to its main campus in Chestertown, Maryland, Washington also features a riverfront campus and a 4,700-acre river and field campus that provides unique research opportunities for students and faculty.