As a Seasoned Leader in Higher Education, Dr. Sosulski Brings Passion for Liberal Arts and Talent for Consensus Building to the Role 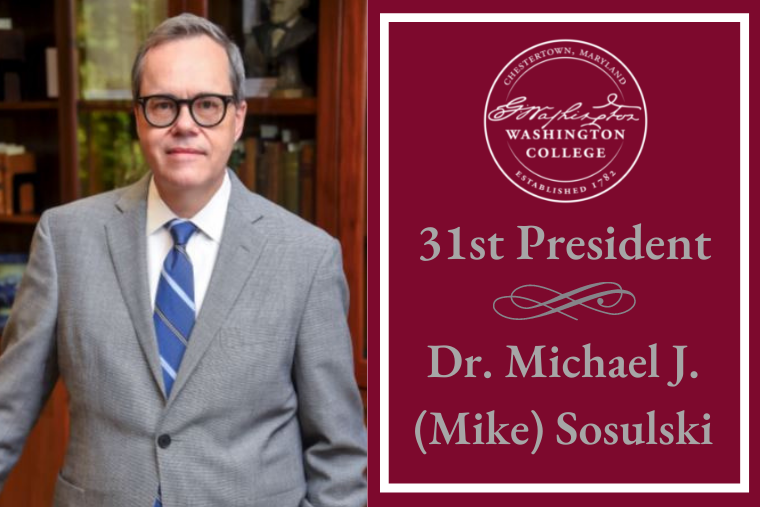 Washington College’s 31st president will be Dr. Michael J. (Mike) Sosulski, a leader in academic and student affairs, financial stewardship and change management. Sosulski, who currently serves as Provost at Wofford College in South Carolina, has been appointed to the role after a unanimous recommendation by the Presidential Search Committee and election by the Board of Visitors and Governors.

Sosulski will assume the position from Wayne Powell, Ph.D., who has led the College on an interim basis for the past year. He will assume his duties beginning September 1, 2021.

“I am incredibly honored and humbled to be chosen as Washington College’s 31st president,” said Sosulski. “The College’s commitment to students’ personal intellectual growth and preparation for highly engaged public lives truly speaks to my own sense of mission in higher education,” he added, noting that the liberal arts have never been more valuable and needed as they are today. “Washington College’s special inflection of liberal arts values makes the opportunity here especially appealing, and I am looking forward a great deal to joining the Washington College community as we work together to lead this historic and vibrant College into its next era of flourishing.”

During his tenure at Wofford, the college has redesigned or reconstructed a range of vibrant academic spaces, including the $4 million-dollar conversion of the Sandor Teszler Library into an Academic Commons; construction of the Rosalind Sallenger Center for the Arts; and most recently, the design and construction of a new $9.5 million Green Globes certified academic science building. Sosulski also appointed the first academic Dean of Diversity, Equity and Inclusion, created the Diversity Search Advocacy Program to diversity Wofford’s faculty, and led comprehensive work to strengthen shared governance, including the creation of an independent Rank and Tenure committee.

Sosulski earned his BS in German from Georgetown University, and went on to receive an M.A. followed by a Ph.D. in Germanic Studies from The University of Chicago.

About the Selection Process

Sosulski’s selection concludes a six-month nationwide search conducted by a 17-member presidential search committee that included representation by the board, faculty, staff and student body. With the assistance of WittKieffer, a professional search firm, an initial pool of over 90 candidates was presented to the search committee for consideration.

Prior to the construction of the candidate pool, listening sessions were conducted with key stakeholders to gather feedback on what attributes were the highest priority. That information was then synthesized to build the final search prospectus, which was used to advertise the position.

“We are incredibly excited to welcome Dr. Sosulski to our community and feel equally confident that the strong foundation that was put into place at the start of this search has resulted in putting the absolute right person at the helm,” said Stephen Golding, Chair, Board of Visitors and Governors. “Not only is he a skilled leader with a passion for the value of the liberal arts experience, but he is also energetic and authentic. He possesses humility, grace and a sense of humor. He demonstrated an astute understanding of our challenges, along with the fortitude to dig in and build consensus around solving them.”

Among other things, Sosulski recognizes the need to put immediate focus around retention and four-year graduation rates, to cultivate big, innovative curricular ideas, and to continue to make progress in building an inclusive and supportive culture for all students, staff and faculty.

Sosulski will be joined by his wife, Dr. Corinne P. (Cori) Crane, who currently serves as Associate Professor and German Language Program Director in the Department of Modern Languages and Classics at the University of Alabama. They have two adult sons, Peter and Nick.

“Washington College is indeed a unique and wonderful place, and I am truly excited to have been named as the institution's next president,” said Sosulski.

Founded in 1782, Washington College is the tenth oldest college in the nation and the first chartered under the new Republic. It enrolls approximately 1,200 undergraduates from more than 35 states and a dozen nations. With an emphasis on hands-on, experiential learning in the arts and sciences, and more than 40 multidisciplinary areas of study, the College is home to nationally recognized academic centers in the environment, history, and writing. Learn more at washcoll.edu.