Hundreds turn out for the dedication of WC’s new Hodson Boathouse, which promises to be a game-changer for the College’s rowing and sailing teams, as well as a new community focal point on the Chester River. 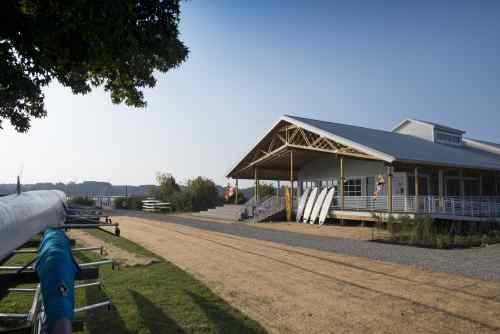 Washington College President Kurt Landgraf joined coaches, student athletes, alumni, community members, and representatives of The Hodson Trust in dedicating the new Hodson Boathouse, a facility that, in the words of Athletics Director Thad Moore, “establishes Washington College as a top Division III destination for first-class prospective rowing and sailing student athletes and ensures an exceptional future on the water.”

The event on Sept. 22 marked the culmination of decades of waterfront vision that Landgraf noted has been supported and nurtured all along by The Hodson Trust, which donated $2.5 million to launch the $5 million project. In cutting the ceremonial ribbon, Landgraf was joined by Moore, Eileen Dickey of The Hodson Trust, Regis de Ramel ’97, a member of the College’s Board of Visitors and Governors and crew team alumnus, who made a $1 million gift, BVG member and donor Ann Horner ’80, and Alex Kincaid ’19, captain of the men’s rowing team.

“Few schools are lucky enough to have a river as beautiful and storied as the Chester as part of their history and fabric. And even fewer are lucky enough to count The Hodson Trust among their most generous supporters,” Landgraf told the gathering of about 300 onlookers. “Since the birth of the College’s rowing program some 50 years ago, The Hodson Trust has been a loyal supporter of the College’s waterfront activities.”

Over the years, Landgraf noted, The Hodson Trust has provided funding for a rowing tank, new rowing shells, team jerseys, and an erg machine. In 2007, John Wagner, a former varsity rower who was then director of the College’s waterfront, sought a new boathouse, and shortly thereafter, The Hodson Trust made the lead gift of $2.5 million for the project.

Moore called the new boathouse “a true game-changer for our rowing and sailing programs with respect to both recruiting and student-athlete development. Washington College is one of only nine Division III institutions to sponsor men’s rowing, women’s rowing, and sailing all at the varsity level, and this facility properly frames the commitment of the department and institution to those programs.”

“Virtually every campus construction or renovation project—stretching back to the Johnson Fitness Center in 1991 and culminating with The Hodson Boathouse—has been stewarded to completion by Reid Raudenbush,” Landgraf said.

Support for the Hodson Boathouse, for which the College broke ground last fall, came from more than 150 donors. Located next to the Lelia Hynson Pavilion on the Chester River, the new boathouse is 9,200 square feet, about 3,600 square feet of which comprises a wraparound deck that offers expansive views for events and regattas.

The building houses locker rooms for the rowing and sailing teams, bathrooms, two offices, a team lounge, a 35-seat classroom, and an ergonomics training room with 32 stationary rowing machines. A state-of-the-art tank room with a 16-station, 25-by-54-foot rowing tank enables rowing team members to perfect their sweep technique and practice when the weather is too cold or inclement for on-the-water training.

With environmental sustainability at the forefront, Hodson Boathouse is heated and cooled by an energy-efficient geothermal well system, lighting is entirely LED, and the deck is made of recycled plastic. As noted by the building’s designer, the architecture and engineering firm HGA, “Water is one of the most important elements of the site for the College because of the focus on the Chester River as an area of study; therefore, water usage and protection of the watershed through rain gardens and shoreline mitigation plantings were identified early on as primary concerns for project performance.”

In addition to the rowing and sailing teams, the new boathouse will be a gathering place for the Chester River Rowing Club, a group of master racers and recreational rowers. And, with the ability to convert one of the training rooms into an open-air event space, the College expects the new buildings to be a focal point for events and social functions.