Seven for the Prize

Seven authors have been chosen as finalists for the 2018 George Washington Prize, for books ranging in topic from the Burr conspiracy to Patrick Henry, from the power of objects to the Boston Massacre. 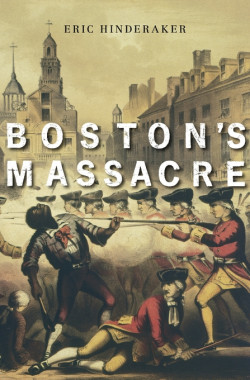 Seven books published in 2017 by the country’s most prominent historians have been named finalists for the George Washington Prize. The annual award recognizes the past year’s best-written works on the nation’s founding era, especially those that have the potential to advance broad public understanding of early American history.

“Understanding the first chapter of our national story is more essential today than ever,” said Adam Goodheart, director of Washington College’s Starr Center for the Study of the American Experience, one of the prize’s three cosponsors. “These books reconnect us with ideas that made the United States a beacon for democratic movements around the world.”

The finalists’ books combine depth of scholarship and broad expanse of inquiry with vivid prose that exposes the complexities of our founding narrative. Written to engage a wide public audience, the books provide a “go-to” reading list for anyone interested in learning more about George Washington, his contemporaries, and the founding of the United States of America.

The 2018 George Washington Prize finalists are:

The winner of the 2018 prize will be announced, and all finalists recognized, at a black-tie gala on May 23, 2018 at George Washington’s Mount Vernon.

More information about the George Washington Prize is available at https://www.washcoll.edu/centers/starr/george-washington-book-prize.php

MAX EDELSON is associate professor of history at the University of Virginia and the author of Plantation Enterprise in Colonial South Carolina (Harvard University Press). He was the recipient of the National Endowment for the Humanities Digital Implementation Grant to develop MapScholar, a dynamic visualization tool for historic maps.

JON KUKLA is the author of Mr. Jefferson’s Women and A Wilderness So Immense: The Louisiana Purchase and the Destiny of America, as well as many scholarly articles and reviews. He has served as the executive director of the Historic New Orleans Collection and of Red Hill-The Patrick Henry National Memorial in Charlotte County, Virginia.

JAMES E. LEWIS, JR., is professor of history at Kalamazoo College. His books include The Louisiana Purchase: Jefferson’s Noble Bargain? and John Quincy Adams: Policymaker for the Union.

JENNIFER VAN HORN is assistant professor of art history and history at the University of Delaware and specializes in early American visual and material culture.

DOUGLAS L. WINIARSKI is an associate professor of Religious Studies and American Studies at the University of Richmond, where he teaches a wide range of courses on the history of religion in early America.

ABOUT THE SPONSORS OF THE GEORGE WASHINGTON PRIZE

Since 1860, more than 85 million visitors have made George Washington’s Mount Vernon the most popular historic home in America.  Through thought-provoking tours, entertaining events, and stimulating educational programs on the estate and in classrooms across the nation, Mount Vernon strives to preserve George Washington’s place in history as “First in War, First in Peace, and First in the Hearts of His Countrymen.” Mount Vernon is owned and operated by the Mount Vernon Ladies’ Association, America’s oldest national preservation organization, founded in 1853.  In 2013, Mount Vernon Ladies’ Association opened the Fred W. Smith National Library for the Study of George Washington, which safeguards original books and manuscripts and serves as a center for research, scholarship, and leadership development. www.mountvernon.org

Washington College was founded in 1782, the first institution of higher learning established in the new republic. George Washington was not only a principal donor to the college, but also a member of its original governing board. He received an honorary degree from the college in June 1789, two months after assuming the presidency. The college’s Starr Center for the Study of the American Experience, which administers the George Washington Prize, explores the American experience in all its diversity and complexity, seeks creative approaches to illuminating the past, and inspires thoughtful conversation informed by history.