Scientists in the Drone Age

From Antarctica to Belize to Bermuda, three recent alumnae are finding careers in the cutting-edge science of using drones and remote sensing to study coastal and marine environments. 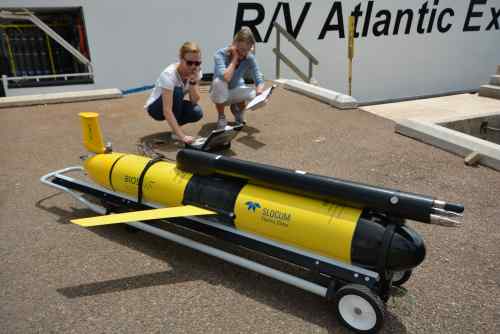 Washington College students participating in the Bermuda Environment field course this summer got an unexpected surprise at the Bermuda Institute of Ocean Sciences (BIOS) when they found WC alum Cordie Goodrich ’15 working as a glider specialist in the center’s Mid Atlantic Glider Initiative and Collaboration (MAGIC) lab.

Goodrich, a math major with minors in biology and computer science, is one of three recent alumnae who are working in the cutting-edge science of using drones and remote sensing to study coastal and marine environments.

Anna Windle ’16, who majored in environmental science with minors in anthropology and biology, is working with satellite remote sensing to measure water quality as part of her PhD studies at the University of Maryland’s Center for Environmental Science Horn Point Laboratory. And Kelly Dobroski ’16, an environmental science major with a biology minor and concentration in Chesapeake regional studies, is part of a collaborative project with Duke University, the World Wildlife Fund, and three local non-profits using drones to map mangroves and coastal habitats in Belize.

For all three, it was a path they didn’t predict as undergraduates, yet in Goodrich’s case, it has already taken her as far afield as Antarctica and now Bermuda, where she programs and flies autonomous underwater gliders that can stay at sea three months at a time, measuring data in the water column. About once a month, she goes offshore aboard the BIOS research ship for a week to take calibrations close to where the gliders are sampling, “just to make sure all of our measures are looking good.” Then she goes back to the lab and analyzes the data.

“I think that’s what I really enjoy about this position,” Goodrich says. “If someone said, ‘Tell me your dream job,’ I would get to work with these robots and then analyze the data, and that’s where it’s landed right now.”

Goodrich started the two-year position in late spring 2019, after spending December through February running underwater vehicles under the Nansen Ice Shelf in Antarctica, a project through UC Davis, where she had started as a technician and then had entered the PhD program. She first started working with drones at UDEL’s College of Earth, Ocean, and Environment, where she interned during the summer before she graduated from WC and subsequently earned her master’s degree—in part studying the Antarctic ecosystem.

When the opportunity arose to do drone research in the Antarctic from a Korean research vessel, Goodrich already had the background knowledge and skills. Specifically, she was helping in groundbreaking research into the movement of water beneath the ice shelf in that part of Antarctica.

“It was a high-risk mission sending this vehicle under an ice shelf and thankfully it came back out,” Goodrich says. “We were going down to 1,000 meters, and when we actually went under the shelf we were at 350 to 650 meters.” Along with two lab mates, Goodrich coded the vehicle, piloted it, and ran the mission files.

After the project, she left UC Davis to take the opportunity in Bermuda. She says her path at Washington College, “although I did not know it at the time, set me up perfectly to go into this field of oceanography so that I have enough biology to understand what’s going on, as well as the computer skills; because my background was so broad, I was able to catch on to more things more easily than if I had been just a biology or math major.”

Windle and Dobroski were introduced to the field while studying for their master’s degrees in environmental management at Duke University’s Nicholas School of the Environment and its Marine Robotics and Remote Sensing Lab. Windle says she used terrestrial rovers to travel down the beach at night to study the effects of light pollution on sea turtle nesting, and aerial drones to study intertidal oyster reefs.

“I’ve always been interested in geospatial technology and science,” says Windle, whose PhD work is focused on optical remote sensing. “At Horn Point, right now I’m learning satellite remote sensing, how to download and process and analyze satellite imagery.” Specifically, she’s working on a project that uses satellite imagery to analyze water quality in the Chesapeake Bay and is working to improve the numerical algorithms to detect optical properties such as sediment and algae in the water.

“I’m using all new software and coding that I’ve never used before. It’s hard, but I am so interested in it, and the more I’m understanding everything, the more I’m like, ok we can do this and this and this,” says Windle.

Dobroski started working at Duke’s “drone lab” in a year-long project to use drones to examine coastal habitats, starting with salt marshes.

“The traditional way is to walk through the marsh, literally counting stems,” Dobroski says. “Drones can more rapidly assess the status of salt marshes.”

That experience positioned her perfectly to be project manager of a collaboration among the World Wildlife Fund, Toledo Institute for Development and Environment, the Southern Environmental Alliance, and the Sarteneja Alliance for Conservation and Development to use drones to map mangroves and coastal habitats in Belize.

“I was not actually flying the drones, but I was helping with capture and release because we were launching from a boat,” she says. “My role was managing the project, making sure the team was communicating well about data management and making timelines.”