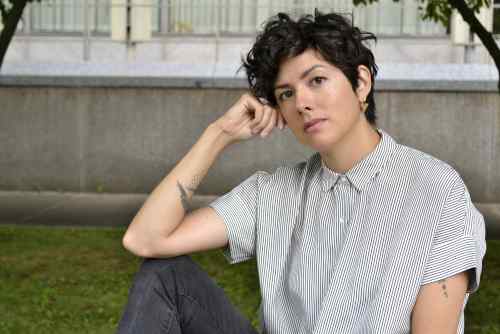 A second-year English faculty member and an alumna who is now assistant director at the Rose O’Neill Literary House each have earned two top national literary awards in poetry. Kimberly Quiogue Andrews, assistant professor of English and creative writing, has won the 2018 Akron Poetry Prize for her first full-length collection, A Brief History of Fruit, while Lindsay Lusby ’08 has won the 2018 Agha Shahid Ali Prize, awarded by the University of Utah Press, for her first full-length collection, Catechesis: a postpastoral.

“It is a testament to the talented writing community fostered here at Washington College that we can celebrate not one but two incredible poetic achievements,” says James Allen Hall, director of the Rose O’Neill Literary House, associate professor of English, and award-winning poet and essayist. “Each of these prizes—the Akron Prize and the Agha Shahid Ali Prize—are nationally competitive prizes with presses that make beautiful and award-winning books. One of Akron’s books was a finalist for the National Book Award in poetry last year, for instance. I feel honored to work with both of these poets and thrilled that poetry is thriving at Washington College.”

In its announcement of the 2018 Akron Prize, the University of Akron Press describes A Brief History of Fruit as shuttling “between the United States and the Philippines in the search for a sense of geographical and racial belonging. Driven by a restless need to interrogate the familial, environmental, and political forces that shape the self, these poems are both sensual and cerebral … Colonization, class dynamics, an abiding loneliness, and a place’s titular fruit—tiny Filipino limes, the frozen berries of rural America—all serve as focal markers in a book that insists that we hold life’s whole fragrant pollination in our hands and look directly at it, bruises and all.”

This year’s judge, Diane Suess, selected Andrews’s collection from 687 entries, calling it a “superb collection” that “offers up history—personal, familial, post-colonial, geo-political, ecological—and indeed the history of fruit, fruit as sustenance, pleasure, exploitable product, as image, parent, love, and wound … The formal variety is remarkable without calling too much attention to itself … the experiments arise organically from each poem’s purpose and particular emotional hue.”

Andrews’s BETWEEN won the 2017 New Women’s Voices Prize from Finishing Line Press, and she is a two-time Academy of American Poets prize winner and a Pushcart nominee. Her poems have appeared in Poetry Northwest, Grist, West Branch, Nat. Brut, The Shallow Ends, and Tinderbox Poetry Journal, among others. Her essays and criticism have appeared in the Los Angeles Review of Books, ASAP/J, and elsewhere.

In Catechesis: a postpastoral , Lusby poses the question: If Clarice Starling and Ellen Ripley could warn the girls and women to follow, what would they tell us? The work combines Grimm fairy tale with understated horror movie and the Book of Revelation to construct a vision of the lush green dangers and apocalyptic transformations inherent in girlhood. This lyric lore, which includes strange diagrams and collages of the botanical and the anatomical, contains hidden instruction to prepare girls for the hazards ahead. The manuscript was a finalist for the 2018 Dorset Prize at Tupelo Press and a semi-finalist for the 2018 Brittingham & Felix Pollak Prizes at the University of Wisconsin Press.

“Catechesis by Lindsay Lusby is a daring and true debut collection,” said Kimiko Hahn in judging the award.