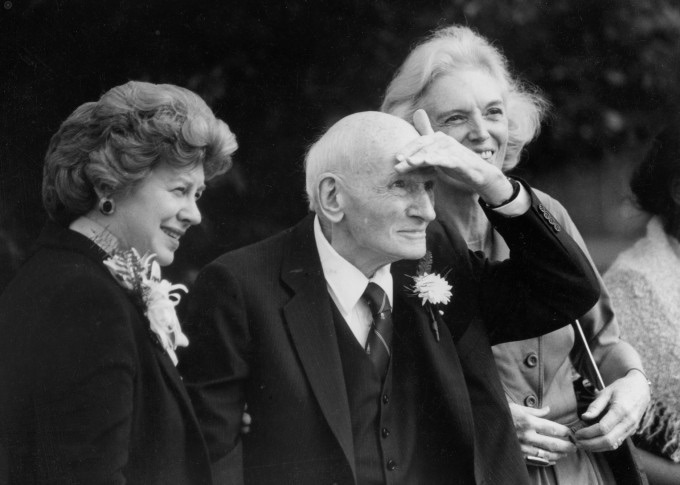 Betty Casey (left), Eugene Casey (center) and Libby Cater (right) appear together at the 1985 opening of the Casey Swim Center.

Betty Brown Casey ’47 (1927-2022) was best known for her quiet philanthropy, which included support of hospitals, education, the environment, and the arts. Washington College, her alma mater, was fortunate to benefit from her generosity as well, as evidenced by a number of buildings on campus as well as student scholarships, an endowed chair, and more.

Born in 1927 and raised in rural Carroll County, Casey earned a scholarship to Washington College where she majored in biology and minored in psychology. She went on to work at the Rosewood State Training School for eight years as a psychiatric social worker.

She married developer and investor Eugene B. Casey in 1955. They were married for 31 years, and it was during that time that she took an active role in running the Eugene B. Casey Foundation. After his death in 1986, Betty wanted to memorialize her husband in recognition of his philanthropy. This effort included a hospice center in Rockville and a diabetes center in Bethesda named for him, as well as the Casey Academic Center and Casey Swim Center at Washington College.

Casey continued to quietly support causes important to her throughout the remainder of her life. She made a $50 million gift to the Garden Club of America to help address the declining tree cover in Washington, D.C., donated nearly $20 million to the Washington National Opera for the purchase of a new building, and donated a 16.5-acre estate to the Salvation Army, among other contributions.

Washington College remained important to Casey, with the various endowments she created accounting for more than 10 percent of the institution’s current total endowment.

In 1985, she gifted the college with the building that is now home to the Rose O’Neill Literary House, named after her mother-in-law, Rose O’Neill Casey. Brown Cottage and nearly all of the properties adjacent to it were also gifts from Casey.

Casey was a strong proponent of supporting students’ financial needs as well, establishing four of the college’s endowed student scholarships. The Annie B. Coleman Scholarship, Clark Clifford Scholarship, Christmas Scholarship, and Raggedy Ann & Andy™ Scholarship are currently worth more than $10 million. During the 2021-22 academic year, these four scholarships supported 37 students at the College.

She also funded the W. James Price IV Chair in Business Management, valued at more than $1 million and endowed the Eugene B. Casey Medal, which is given annually to the graduating woman who is voted by the faculty as “outstanding in the qualities of scholarship, character, leadership, and campus citizenship.”

In addition to the property gifts and endowments, Betty occasionally provided direct support to individual students facing difficulties. One little known example dates back to 2001, and a first-year student whose father died when the World Trade Center tower collapsed on 9/11. Knowing that the family’s finances would be impacted by this devastating loss, she paid the remainder of his tuition so that he could continue his education and earn his degree. She also paid for his sister’s final two years at another university.

Prior to her death, the campus community had begun celebrating her late husband’s legacy of generosity through Casey Time, a day of service devoted to campus beautification.

Casey received an honorary degree from Washington College at the 1986 Commencement.