Using a groundwater testing site on the lower Chester River, environmental science students at Washington College have embarked on an innovative collaboration with agroecology students from the University of Maryland College Park to gather long-term data into whether sea level rise is bringing more saltwater into the Eastern Shore’s agricultural fields. 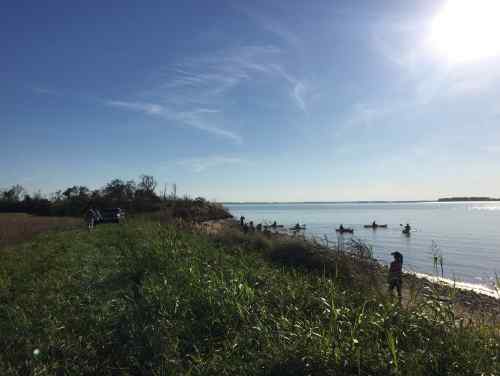 Most people think of sea level rise as something visible, but in Rebecca Fox’s field methods in environmental science class, students have begun long-term research into an invisible potential effect—saltwater intrusion into agricultural fields on Maryland’s Eastern Shore. And, they’re collaborating with students from the University of Maryland, learning what it’s like to work with fellow researchers who aren’t even in the same county, let alone on the same campus.

Fox, assistant professor of environmental science and studies, came up with the idea with her friend and collaborator Kate Tully, assistant professor of agroecology at UMD’s Department of Plant Science & Landscape Architecture. To jump-start the project, the pair applied for and received funding through MADE CLEAR, which is funded through the National Science Foundation’s Climate Change Education Project.

Fox used her portion ($5,000) to establish a permanent research station on a farm on the lower Chester River, where she and students installed eight groundwater wells equipped with instruments that can gather a variety of data about the groundwater.

“The data loggers collect information every 15 minutes to half an hour, data on groundwater temperature, how high the groundwater is, and the salinity of the groundwater,” Fox says. “We’re hoping we can use this data that will be collected over the next five to ten years to monitor whether saltwater is intruding into the farm fields. The goal is to bring our classes together every fall to the farm to do this research project and to look at the data… And we’ll have this long-term dataset so we can do some analyses, and there’s no reason we can’t use it for research and publish it.”

Ben Nelson ’18, an environmental science major and biology minor, was among the WC students who worked on the project last fall.

“We can look at the data and see what is going on over time, because that’s what is important,” he says. “Looking at things short-term is great, but we have to look at the bigger picture, and this research opportunity allows us to see what’s going to occur over time. We’re going to have to mitigate these issues or adapt to these changes.”

Last fall, the two groups of students met once at the site, where they spoke with the landowner about changes he has seen already, and examined how the groundwater wells work. Though looking at the same data, the classes are approaching the research from slightly different perspectives. The UMD agroecology students are focused on agriculture and food production, but also on soil health and the entire agricultural system, while the WC students, with their focus in environmental science, are thinking more broadly and about other aspects than just traditional agriculture.

“The intention is to get the students together, get them to talk, get them to look at this data, and then at the end of the class we have them come up with a plan to produce collaborative podcasts,” Fox says. “Half the podcast team was at College Park, half the team was here, and they had to figure out how to put a podcast together from different locations. So much science is collaborative, and you aren’t always in the same location as the people you’re working with. The hope was that the students would get this experience of remote collaboration and see how different it is when you have to cooperate remotely, and how clearly you have to communicate.”

Nelson says this real-world collaboration was one of the trickiest but most valuable parts of the project.

“These are people who are over an hour away, and this is when we rely on technology to communicate. And that was good practice,” he says. “It really made you plan and consider others… In the beginning when we first started communications with them we were a little bit hesitant on both ends…. But as we progressed through the project I think we realized the only way we were going to get this done is to learn and adapt.

“We could interact with people of different backgrounds and further expand our collaborative skills,” he says. “This will definitely be helpful in the workplace, because you don’t just work with the same five people every day.”

In the upcoming year, the WC students will also have the opportunity to travel to the U.S. Department of Agriculture’s Beltsville Agricultural Research Center, where Tully’s side of the research is examining how different cover crops can sequester carbon dioxide.

“For that lab, instead of coming here and looking at saltwater intrusion, we’re going to look at the ability of cover crops to mitigate climate change,” Fox says. “They have all of these long- term experimental plots where they’re trying different types of cover crops, and so it’s very much more an agricultural perspective, but it’s looking at how we can diversify our crops to maybe make a difference in terms of how much carbon dioxide we’re putting into the atmosphere.”