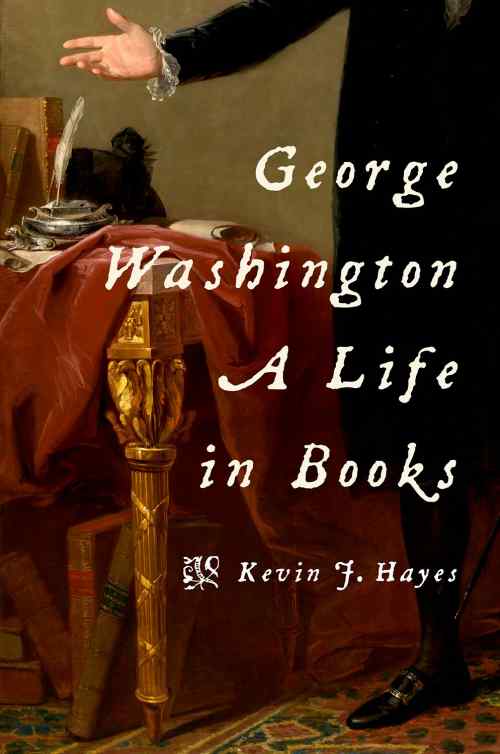 In George Washington: A Life in Books, Hayes presents an intellectual biography of Washington that should permanently dispel popular misconceptions of America’s leading Founding Father as a man of all action and no ideas. Washington scholars have long known that he owned an impressive library of more than 1,300 volumes. Hayes has gone further by meticulously paging through Washington’s surviving books held at the Boston Athenaeum, the Washington Library at Mount Vernon, and other collections, as well as nearly 900 pages of Washington’s notes on his reading, to create a portrait of him as a reader. By closely examining Washington’s notes, Hayes has uncovered an intellectual curiosity that dozens of previous biographers have missed. As a young man, Washington read popular serials such as Gentleman’s Magazine and The Spectator, which helps to bridge the long-imagined gap between him and his learned contemporaries like Franklin, Jefferson, and Adams.

Hayes’s project began with a fellowship that he received in 2008 from Washington College’s Starr Center for the Study of the American Experience. The award allowed him to spend a month working with rare volumes at the Boston Athenaeum, which holds a large portion of George Washington’s personal library.

“While Washington never attended college and felt self-conscious about his lack of formal education compared to some of his peers, he was a broadly inquisitive man who found pleasure as well as instruction in books,” said Adam Goodheart, the Starr Center’s Hodson Trust Griswold Director. “At his plantation along the Potomac River, remote from the intellectual centers of the Enlightenment, the volumes on his shelves formed his high-speed internet connection: the gateway to a global community of thinkers, writers, and leaders.”

Established in 2005, the George Washington Prize has honored a dozen leading writers on the Revolutionary era including, Lin-Manuel Miranda, creator of the hit musical Hamilton. For this year’s prize, a distinguished jury comprised of notable historians Denver Brunsman, Flora Fraser, and Peter Onuf, selected the seven finalists from a field of more than 50 books.

Mount Vernon’s event on May 23 will also honor the six finalists for the 2017 prize:

Jennifer Van Horn, The Power of Objects in Eighteenth-Century America (University of North Carolina Press for the Omohundro Institute of Early American History and Culture)

ABOUT THE SPONSORS OF THE GEORGE WASHINGTON PRIZE

As a 501(c)(3) nonprofit public charity the Gilder Lehrman Institute of American History is supported through the generosity of individuals, corporations, and foundations. The Institute’s programs have been recognized by awards from the White House, the National Endowment for the Humanities, and the Organization of American Historians. For more information: www.gilderlehrman.org.

Since 1860, more than 85 million visitors have made George Washington’s Mount Vernon the most popular historic home in America. A privately-owned national treasure, Mount Vernon is maintained and operated by the Mount Vernon Ladies’ Association. Since purchasing the estate from the Washington family and assuming stewardship in 1858, the Association has embraced a heroic mission to preserve, protect, and maintain the estate for the American people, relying exclusively on private donations, admission fees, and restaurant and retail proceeds. Through robust education and outreach programs, the Association expands awareness about the exceptional life and character of George Washington, sustaining his legacy through research, interpretation, and public education. In experiences on the estate and through its digital outreach platforms, Mount Vernon strives to preserve George Washington’s place in history as “First in War, First in Peace, and First in the Hearts of His Countrymen.” For more information: www.mountvernon.org.

Washington College was founded in 1782, the first institution of higher learning established in the new republic. George Washington was not only a principal donor to the college, but also a member of its original governing board. He received an honorary degree from the college in June 1789, two months after assuming the presidency. The college’s C.V. Starr Center for the Study of the American Experience, which administers the George Washington Prize, is an innovative center for the study of history, culture, and politics, and fosters excellence in the art of written history through fellowships, prizes, and student programs. For more information: www.washcoll.edu.