A double major in anthropology and psychology, Sidney Stone ’18 traveled on her own to South Africa to intern with SAVE, South African Volunteering Experiences, where she saw first-hand the poverty, violence, and social dislocation facing the people living in the townships. 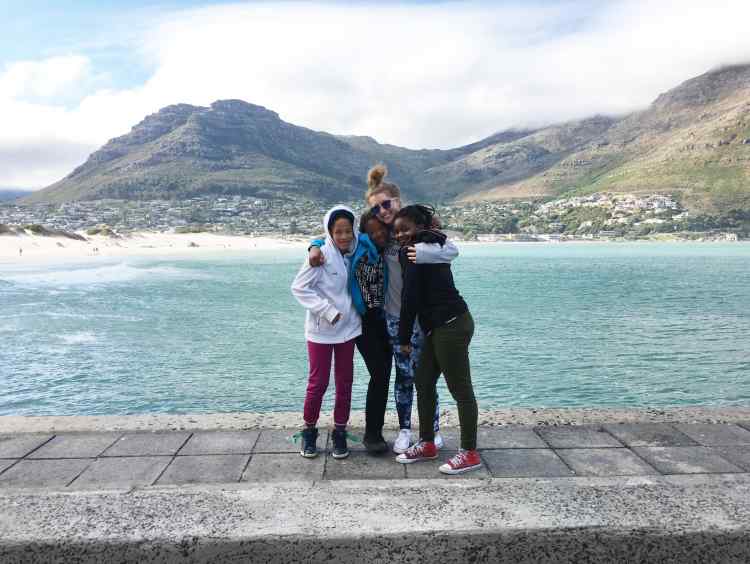 If the purpose of beyond-of-the-classroom experiential learning is to push students out of their comfort zones, then Sidney Stone’s internship last summer in Cape Town, South Africa, was an unqualified success.

“It was really intense. When I left, I was like, ‘Wow! I am so happy to be home,’” says Stone, who spent a month-and-a-half in Cape Town. “But at the same time, I really miss it. I had a great time, I made some great friends. I can’t really contact my kids because they don’t have social media, but I really miss the kids that I worked with. They were making great progress, too.”

Stone learned about SAVE through Julie Markin, associate professor of anthropology. Based in Cape Town, the organization draws volunteers from around the world to help in a broad range of capacities in six African countries, from working with wildlife to helping young entrepreneurs learn marketing skills. The Hodson Trust helped fund Stone’s travel.

Her primary internship was at a skills development workshop, teaching adults from the townships how to build websites and use social media to help market themselves and their businesses.

“I was teaching them how to use Twitter and Instagram, Snapchat if they wanted to,” she says. “One of my biggest projects was for twin brothers who had finished high school. They really wanted to market their skills in traditional South African music, and they wanted to teach kids to use this music. They were super creative, but they didn’t know how to market themselves. So it was my job to teach them how to use Facebook and how to make pages for themselves to get people to know who they are.”

Stone also worked for SAVE’s Adventure Surf Club, which provides disadvantaged youth from townships in the Western Cape with positive after-school activities, including learning to swim and surf. In a township school called Zusakhe, she helped elementary and middle school students with everything from motor functions to social skills and language, including English, Afrikaans, Zulu, and Xhosa.

When she wasn’t working in the townships, Stone was based in a hostel in a suburban Cape Town neighborhood. The juxtaposition of the townships to the rest of Cape Town was jarring, she says, as was the nature of the work and the immersion into the culture itself.

“I had never been so intensely active with a culture before,” Stone says. “This was not like a tour around some museum. It was, ‘Here you go,’ and they threw me in. I said, ‘I don’t know what I’m doing,’ and they said, ‘We don’t know what you’re going to do either, so do it!’’’

The internship, she says, taught her an enormous amount about controlling her fears.

“I learned I had to smile more and actually feel how lucky I was to be there,” Stone says. “I really valued that opportunity, and I needed to help myself feel that.”