At nearly 1,000 acres and growing, the Natural Lands Project has received a $536,000 state grant to create 125 acres of meadows, 38 acres of wetlands, and 38 acres of forest at Conquest Beach Preserve on the Chester River. 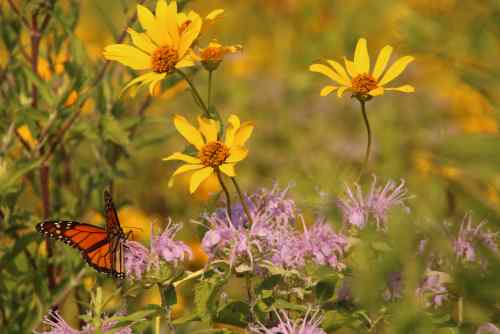 Washington College’s Natural Lands Project (NLP), which is providing Eastern Shore landowners an innovative option for restoring wildlife habitat and improving water quality in the Chesapeake Bay, has earned a state grant of more than $535,000 to transform 200 acres of the Conquest Beach Preserve in Queen Anne’s County.

Partnering with Queen Anne’s County Department of Parks and Recreation and the U.S. Fish and Wildlife Service’s Partners for Fish and Wildlife program, the NLP will create 125 acres of meadows, 38 acres of wetlands, and 38 acres of forest within the preserve, which lies between the Corsica and Chester rivers. The Maryland Department of Natural Resources Natural Filters Program is providing $536,319 for the project, bringing to nearly $2 million to date total federal and state funding for NLP projects, says Dan Small, a field ecologist and coordinator of the NLP, which is managed by the College’s Center for Environment & Society (CES).

“This is the second project we have done on public land. The first was an 83-acre grassland we completed last year at the Sassafras Natural Resources Management Area,” Small says. “Working on public land is especially exciting because it gives us the ability to create large projects, which are really important for grassland birds, and also an opportunity to educate the public about the importance of these habitats for the wildlife that depends on them.

“The Conquest Preserve’s location between two rivers is also significant,” Small says. “While we’re going to be creating habitat to support native species like bobwhite quail, we’re also going to see fantastic benefits to water quality thanks to the buffering and filtering capacity of these habitats.”

CES estimates that the new project at Conquest will remove nearly 43,000 pounds of sediment and 1,100 pounds of nitrogen from both watersheds annually. It will also provide critical habitat for pollinators and bird species including a variety of waterfowl and potentially the black rail, an elusive marsh bird that is in danger of extirpation in Maryland.

Conquest Preserve has 3.2 miles of waterfront along the Chester River and is a popular spot among local birders and boaters. The NLP project is inland of the beach area and will include broad meadows planted in native warm-season grasses and flowers to support pollinator and bird populations, as well as areas of native trees and shrubs. Public walking paths will be incorporated throughout.

“The ability to work in partnership with Washington College and its exceptional staff to achieve the objectives of the county’s master plan for Conquest Preserve is the best case in trying to balance the recreational needs of our community with the protection of natural resources and sensitive lands,” says Nancy E. Scozzari, Chief of Parks and Resource Planning for the county Department of Parks and Recreation. “This project development will provide acres of habitat, ensure protection of natural resources, and provide the public passive recreational opportunities unlike those found elsewhere in Queen Anne’s County.”

Originating from the wildlife and habitat management on Washington College’s 4,700-acre River and Field Campus to help restore bobwhite quail to the region, the Natural Lands Project was launched in 2015. The project has steadily gained momentum as landowners and public entities have seen the benefits of taking marginal cropland and converting it to wildlife habitat. Since its inception, the NLP has created 540 acres of upland meadows and 49 acres of wetlands on 36 private properties in Kent, Queen Anne’s, and Talbot counties. On public land, so far the NLP has received funding to create 208 acres of upland meadows, 38 acres of wetlands, and 83 acres of trees and forestation.

In total, CES estimates that when this latest project is completed, all of the NLP sites combined will remove annually 12,042 pounds of nitrogen, 619 pounds of phosphorous, and 228,696 pounds of sediment from the Bay’s tributaries.

Collaborators with Washington College on these projects include ShoreRivers, Maryland State Parks, the Queen Anne’s County Department of Parks and Recreation, Partners for Fish and Wildlife, Ducks Unlimited, Tall Timbers Research Station, the state Department of Natural Resources, and the National Fish and Wildlife Foundation (NFWF).