Justin Thomas Nash, a 22-year-old from Smyrna, Delaware, has won the 2021 Sophie Kerr Prize, the largest undergraduate literary prize in the nation. He was among six finalists considered for the prize, worth $65,580 this year.

Named after an Eastern Shore author who made her fortune in New York writing women’s fiction during the 1930s and 1940s, the Sophie Kerr Prize is awarded each year to the graduating senior demonstrating the best potential for future achievement in a literary endeavor. The first Sophie Kerr Prize was awarded in 1968. Since then, the endowment has provided more than $2.3 million in prize money to promising young writers, and brought to campus many of the nation’s top writers. 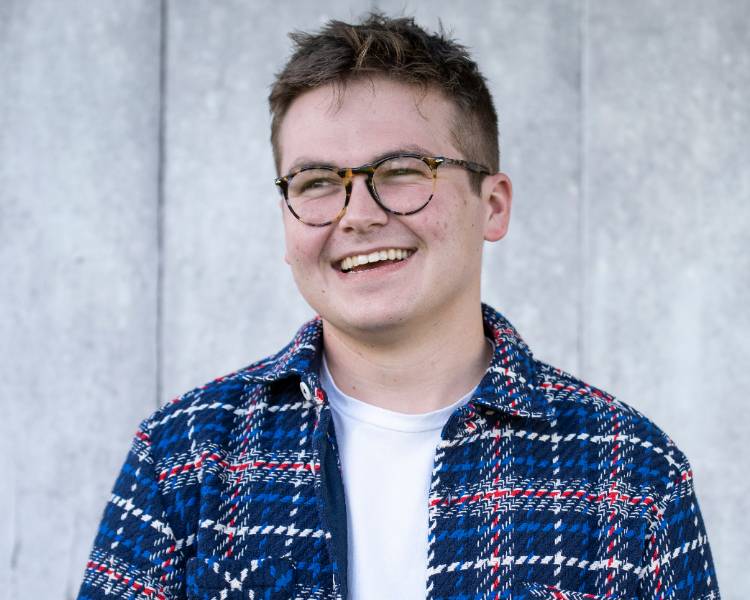 During his four years at WC, he has held a number of literary positions, including editor-in-chief of the campus literary magazine Collegian, and the liberal arts journal Washington College Review. He has been senior poetry reader for Cherry Tree: A National Literary Magazine @ Washington College, vice president of the Writers’ Union, and a member of both the Cater Society of Junior Fellows and Sigma Tau Delta, the honor society for English majors. He was awarded the William Warner Prize for Writing about Nature earlier this spring.

In addition to his internships with Cherry Tree, Nash has held two distinguished internships in the writing and publishing world. Last summer, he interned for 24 Pearl Street, and the summer before that he interned for Copper Canyon Press, the country’s leading independent poetry publisher.

The poems, stories, and essays in his portfolio, collectively titled Prestidigitate, examine travel, childhood, and conceit through manipulated address and formal play, and greatly impressed the faculty members tasked with choosing a single winner from a pool of talented writers.

“The Sophie Kerr Committee describes Justin Nash as the consummate literary citizen, notes Sean Meehan, chair of the Department of English and director of the Sophie Kerr Endowment. “Justin grasps the power of writing to move the world, one thoughtful and witty and well-edited line at a time. As a student who has actively worked on every campus publication, with unparalleled editorial skills and instincts, and incredible generosity in supporting his peers and our programs, Justin already has a deep understanding of writing as both a profession and a calling. The Sophie Kerr Prize is awarded to the senior with greatest promise for ‘future fulfillment in the field of literary endeavor.’ Among an incredibly strong field of writers this year, and particularly the talented group of finalists we hear read Friday evening, the Committee believes Justin’s promise is unbounded. We will all be hearing more in years to come from this leader and explorer of the literary landscape.”

James Allen Hall, associate professor of English and director of the Rose O’Neill Literary House who created the Cherry Tree Young Writers’ Conference Nash first attended, has known Nash since even before he enrolled at Washington College.

“He has proven himself to be an incredible literary talent, with particular strengths in poetry and creative nonfiction writing but also in editing and publishing,” notes Hall. “In his first year, he wrote an essay that was nominated for the Norton Writer’s Prize and which was runner-up and published on Norton's website. About that essay, the judges wrote that Justin ‘uses an innovative form, imagery, and dialogue to create an evocative piece that helps readers reflect on bodies, identity, and control.’

“Justin builds work of incredibly imaginative richness and rigorous structural integrity. His writing echoes literary forbears like Robert Frost and Louise Glück in lines like these: ‘I want to know // which thing to take solace in: that someone/ mends the fence, or that they will not try forever.’ There's also a deep awareness of contemporary writers as well, especially in his more formally daring work that employ echoes of Jericho Brown and Franny Choi. And yet Justin’s voice never sounds like anyone else. He is making it all new—whether he's writing about rural landscapes, or about guns, or about the ways in which our bodies are policed. Justin's writing is urgent and refined, restrained but revelatory. We are meeting him at the beginning of a great career.”

After graduating, Nash intends to take a gap year before pursuing an MFA in poetry.