Japan Entering a New Era: A Tea and Talk with Dr. Oros 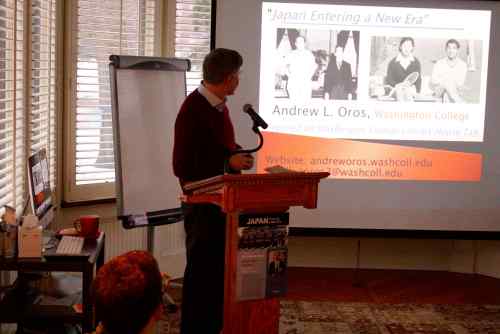 On Monday, February 11, The Rose O’Neill Literary House hosted a tea and talk with Dr. Andrew Oros, the Director of Washington College’s international studies program. He previously served as an invited research fellow at Tokyo’s National Institute for Defense Studies, and was a keynote speaker at an international policy seminar held at Japan’s national library.

During the talk, Dr. Oros discussed his most recent book, titled:Japan’s Security Renaissance. The book involves coming to terms with the past and how Japan has been adapting to the world’s new balance of power. Oros talked about how these issues are still relevant today, as Japan is about to enter a new era marked by a new prince, Naruhito, taking the throne after his father Akihito abdicates. “Japan’s security politics have always been very political and actively debated,” said Oros, as Japan now plays a larger role in Eastern Asian politics. The talk took place on the same day as the National Foundation Day in Japan, which celebrates Japan’s first emperor taking the throne in 880 B.C.E. Dr. Oros ended the talk by answering some questions from the crowd.