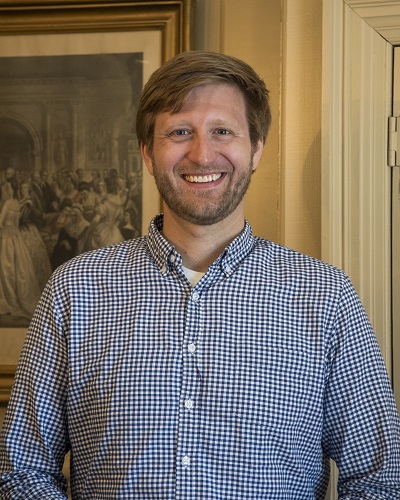 2017–2018 Hodson Trust-John Carter Brown Fellow Cam Terwilliger is a Brooklyn-based writer whose work has been published by literary magazines such as Narrative, American Short Fiction, Gettysburg Review, Post Road, and elsewhere. He holds an MFA from Emerson College and his work has been supported by fellowships, scholarships, and awards from the Fulbright Program, James Jones First Novel Fellowship, Virginia Center for the Creative Arts, Massachusetts Cultural Council, Historical Novel Society, and the Bread Loaf, Tin House, and Sewanee Writers’ Conferences. In 2015–2016, Cam served as the Reginald S. Tickner Fellow, a writer-in-residence position at the Gilman School in Baltimore. Currently, he teaches creative writing at Seton Hall University and serves as Associate Fiction Editor for Bucknell University’s literary magazine, West Branch.

While in residence as the Hodson-Brown Fellow, Cam worked on his historical novel, Yet Wilderness Grew in My Heart, a book set in New York and Québec during the French and Indian War (1754–1763). The plot centers on Andrew Whitlaw, a Manhattan physician who—after an ongoing struggle with syphilis—must relocate to his older brother’s estate in the Hudson Valley to recover. From this starting point, the plot follows the narrator as he grows embroiled in his brother’s obsessive pursuit of a counterfeiter—a former slave operating on nearby Mohawk Native American land, a man costing their family trading business dearly with his false bills. By working in the genre of historical fiction, Cam aims to reimagine foundational novels of colonization such as Cooper’s The Last of the Mohicans from a postcolonial perspective. Engaging a complex cast of  Euro-American, African American, and Iroquoian characters, Yet Wilderness Grew in My Heart explores issues of race, religion, capitalism, disease, landscape, the psychology of power, and the dense web of cultures that gave rise to the North American continent we know today.