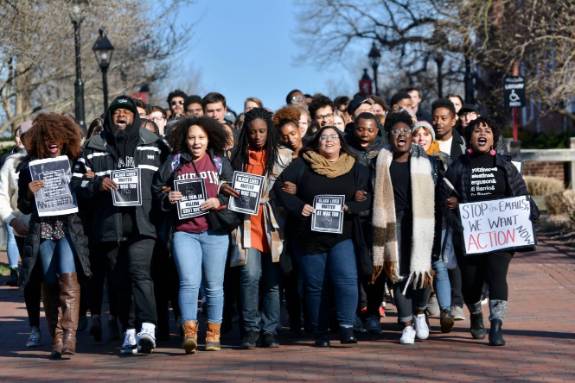 When it comes to handling tough situations, Paris Mercier is all in. Whether she’s working with a homeless child amidst a crisis or uncovering heart-wrenching African- American history, she’s a dedicated advocate for others. Combining a passion for sociology with an interest in justice, law, and politics, Paris’s Washington College experience is just the start.

After a drive-by shooting took the life of a young girl, Makiyah Wilson, in Northeast D.C., the entire staff at Sasha Bruce Youthwork was left shattered and confused. Paris Mercier ’20, then a summer intern, immediately stepped in as a mental health liaison for at-risk and homeless youth in a time of crisis.

“In that moment, something in me switched,” she explained. “I became the person I always wanted to be on the job.” Thrown into one crazy situation after another, Paris was able to do hands-on work while growing as an individual and a professional—an opportunity not available to most college students.

Thanks to her prior experience as a virtual volunteer counselor for the National Crisis Text Line, she was already equipped with the necessary crisis training required. In her new role, she met with families and kids throughout the day, recommending resources and connecting them to mental health professionals. Working alongside adults with double master’s degrees, Paris  felt underqualified, but that didn’t stop her from throwing her whole heart into it.

She explained, “What I saw in those kids, they did not see in themselves.” At that moment, she realized that this was exactly what she was meant to do with her future.

Back across the Chesapeake Bay Bridge, Paris’s  impact is equally profound. Spending almost three years with the Starr Center for the Study of the American Experience, she worked tirelessly on the Chesapeake Heartland Project. As an intern, she helped to build bridges between the College and community, while making African-American history accessible to all.

Meanwhile, Paris  stepped in as the President of the Black Student Union for almost two years and contributed to the College’s first annual Martin Luther King, Jr. Day of Service. More than 300 students, faculty, staff, and local residents participated in this groundbreaking day of compassion, learning, and reflection.

“This is why we come to Washington College,” she explains, reflecting on that overwhelmingly impactful day. “This is exactly what I had envisioned.”