During his visit to Washington College, Senator Chris Van Hollen tours the new Hodson Boathouse and urges students to get out and vote. 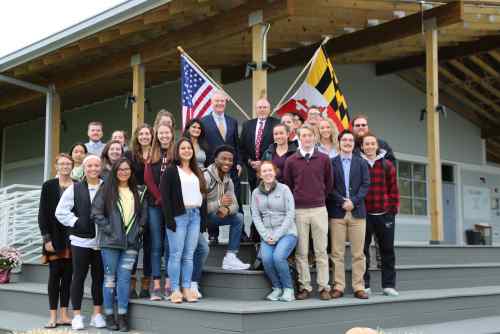 Van Hollen joined President Kurt Landgraf for a walk through the boathouse, where he remarked on the state-of-the-art practice tank for the rowing teams and the expansive ERG room facing the Chester River.

Students from two of Professor Melissa Deckman’s political science courses—empirical research methods, and state and local politics—engaged in a question-and-answer session with Van Hollen in the boathouse’s classroom. Questions ranged from who the senator was supporting in Maryland’s gubernatorial race (Democratic challenger Ben Jealous) to what he felt were the biggest issues facing Congress when it reconvenes after the upcoming midterm elections (wage growth, immigration reform, climate change, criminal justice reform, and infrastructure issues, among others).

Van Hollen, who previously served in the House and was elected to the Senate during the 2016 general election, took the opportunity to encourage the students to vote in the midterms if they want to effect change that they care about. He noted that in the 2014 midterms, only 16% of eligible voters aged 18-29 voted, compared with 57% of people over 60.

“It’s just a huge amount of potential power left on the table every time,” he told the students. “Every vote does count.”