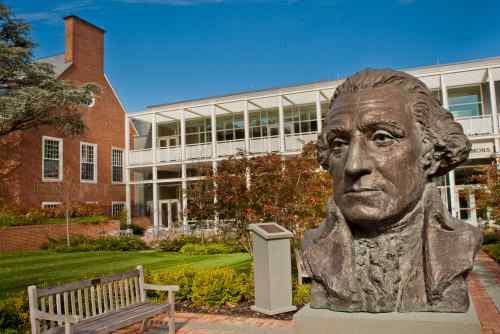 Following a trajectory it has been traveling in similar higher education statistics, Washington College has elevated three points in the Wall Street Journal/Times Higher Education college rankings for 2018. The latest rankings, which compare the college alongside all other universities and colleges in the country, list the College at 205, compared with 208 in last year’s ranking. Among liberal arts colleges in the survey, Washington College ranked 75th in the country.

“Moving up at all in these rankings is a difficult task; moving up three points is a terrific achievement,” says Washington College President Kurt Landgraf. “What’s especially gratifying about our performance in this Wall Street Journal/Times Higher Education list is that when you break out only liberal arts colleges, we are ranked 75th in the country. That’s an excellent standing, particularly for this survey which relies on real data and student input. We should be extremely proud of what this says about Washington College.”

The Wall Street Journal/Times Higher Education rankings make an effort to quantify how colleges and universities provide a powerful learning environment to students, putting the emphasis on student success. One of the ranking’s most valuable tools is a survey of more than 100,000 current students that examines their opinions on their interaction with teachers, satisfaction with their education, and how engaging their academics and studies are.

Among the survey’s questions were whether students would choose Washington College again, if the College provides an environment where they feel surrounded by exceptional students who inspire and motivate them, and if the College is effective in helping them obtain valuable internships that help them on a career path. On a scale of 0 to 10, 10 representing strongest agreement, students answered between 7.7 and 8.1 for each of these questions.

In specific categories, Washington College ranked 149th in “resources,” which addresses variables including how much the College spends on students and student-to-faculty ratio, and 200th in “outcomes,” which takes into account statistics including graduation rate, salary after graduation, average debt, and the default rate.

“The ranking includes clear performance indicators designed to answer the questions that matter most to students and their families when making one of the most important decisions of their lives—who to trust with their education,” the authors said in describing the survey’s methodology. “These questions include: does the college have sufficient resources to teach me properly? Will I be engaged and challenged by my teacher and classmates? Does the college have a good academic reputation? What type of campus community is there? How likely am I to graduate, pay off my loans and get a good job?”

Washington College’s elevation in the 2018 rankings jibes with its steady climb in other well-known annual examinations of higher education performance. In U.S. News and World Report’s Best Colleges rankings for 2018, WC is listed 96th among liberal arts colleges across the nation in the 2018 report, up from 99th in 2017, 100th in 2016, and 105th in 2015. And in 2016, for the first time, the College was included in the annual Top 300 Best College Values by Kiplinger’s Personal Finance magazine, ranking 232nd among the top 300 institutions out of 1,200 surveyed and 91st among the top 100 liberal arts colleges nationally.