As part of the College’s Explore! program for incoming students, a collaboration with local artist Fredy Granillo brings a boring campus wall into bloom as a beautiful public mural. 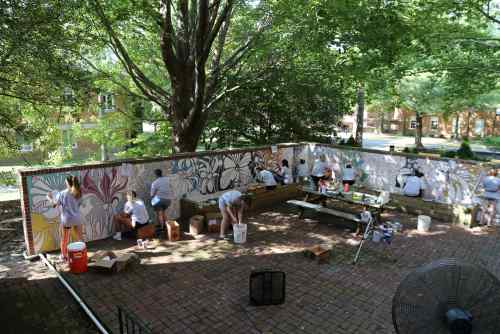 In a sun-dappled, bricked terrace beside one of Washington College’s oldest buildings—Bunting Hall—the mellow Latin music flowing from a speaker on a picnic table competes with the late-summer rattle of cicadas while students paint a garden. Some of them listen to their own tunes with earbuds in, others talk back and forth, but all focus on the work at hand—turning what had been a barren, boring wall into Washington College’s newest piece of public art, a mural depicting native Maryland flowers.

“The idea was to celebrate the diversity with the colors and the shapes and sizes,” says Fredy Granillo, the Chestertown artist who conceived the mural design and has been collaborating with WC staff since last fall to make this happen. “If you look at the mural you see small flowers, big flowers. The meaning is, it doesn’t matter what color or size, each is a part of the larger mural.”

The mural arts project—a metaphor for the student body and the larger Chestertown community as well—is one of the College’s 30 Explore! pre-orientation programs for incoming students. It came about after Andrea Vassar, assistant dean for first-year experience and student success, visited Mural Arts Philadelphia, the nation’s largest public arts program.

“That’s what gave me the inspiration, and it just started growing,” says Vassar, who is the program’s staff advisor. She presented the idea to Laura Johnstone Wilson, who oversees Explore! and loved the concept. Wilson contacted local artist Marcy Dunn Ramsay, who suggested her son-in-law, Granillo, for the project.

Granillo developed three proposals, which were presented to Senior Staff and College President Kurt Landgraf, who chose the flower mural. Then, Wilson approached Unity Nursery in Church Hill, who said they’d like to contribute flowers and plantings which will go into the long-dormant raised-bed boxes beneath the mural. Valerie RiChard, associate vice president for facilities, and her team worked all summer to prepare the courtyard and the wall for its makeover.

Students spent the first day of the program traveling to Philadelphia to take the Mural Arts Tour, where they also met with Carlos “CALO” Rosa, a friend of Granillo’s whose artwork is part of Mural Arts Philadelphia. He discussed the artistic process, as well as the meaning of the murals from the artist’s point of view.

The next day they started on the mural itself. During the summer, Granillo had already painted the outlines. Students worked from eight-by-ten copies of each section with the colors depicted by number. Granillo mixed all the paint, numbered each container, and handed the students boxes for each section containing all that they needed. Over the course of three days, the students worked with Granillo, Vassar, and each other to paint the mural. The final touch was the plantings installation, which the students also did.

This is the first public mural in Chestertown by Granillo, a multi-talented musician and artist whose specialty is his distinctive interpretation of Talavera pottery. He had created five public murals in his native El Salvador, always with community input and young people participating.

“This was kind of perfect for me because they wanted the students to paint it,” he says. “Students are like seeds, finding water to grow into a flower and to make the community better with their ability and energy.”

It’s the second mural at WC; the first, organized by an initiative called Sandbox—which was supported by a grant from The Andrew W. Mellon Foundation— saw students, staff, faculty, and Baltimore-based artists transform a wall on the side of the Gibson Center for the Arts in a “Midnight Mural Attack.”

The students planned to complete their weeklong program with a trip to Rock Hall to see its “Murals of Rock Hall” public art, as well as to sample the local ice cream, visit the beach, and see the Chesapeake Bay.