A group project in a class on social justice has led three students to address racial microaggressions on campus in an effort to better educate and engage students, staff, and faculty about the issue. 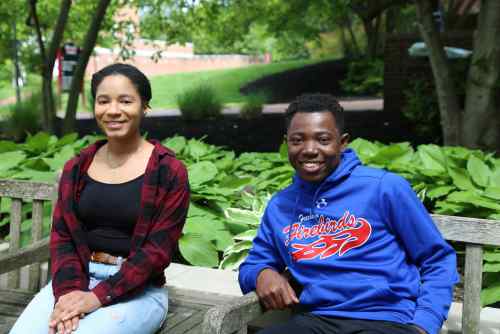 When Arianna Hall ’20, Mai Do ’19, and Ervens Jean-Pierre ’20 began to address the topic of racism on Washington College’s campus for a project in a social justice class, they almost immediately ran into questions.

“We haven’t witnessed or been victims of blatant racism, and we are all students of color,” says Hall, a double major in political science and music. “How can we tackle it honestly?” They approached their teacher, Political Science and International Studies Professor Christine Wade, whose class in human rights and social justice asks students to choose topics they think should be addressed, among them human trafficking, toxic masculinity, and the death penalty. Wade asked the students, if there’s nothing blatant, then it’s not something big, it’s something smaller. So what is that?

“Microaggressions,” Hall says. “Let’s look more into instances of racial microaggression on campus and how we can bring information on this to the campus, how we can implement something that the college can move forward with in order to dispel that issue.”

As they started to put together the elements of their project—a public panel discussion, a video, and a petition on change.org to encourage racial bias training on campus—they wrestled with a name, settling on The Lumen Project, to “illuminate it, bring light to it,” Hall says. “We want to invite people into the conversation, because a lot of times race is a heavy topic that people feel like you have to be colored to be in the conversation, or you don’t understand what’s going on enough to be a part of it. But the reality of the situation is that we are all a part of it, and we have to come together to combat it, so it’s not just a colored-people topic … it’s important to realize that this isn’t just a ‘me’ problem, it’s an ‘all of us’ problem.”

The video tells a story of a student (played by Hall) going through her day during which small comments begin to add up. Hall notes that this is a compilation of comments she and others have heard, though not all in one day. They include things like, “Can I touch your hair?” or “Where are you really from?” or a friend to whom she confides in who says, “It sounds like a compliment to me. I don’t know why you have to make everything about race all the time.”

“These build up through the day and steadily make you feel like a small tiny piece in the world,” Hall says. “Instead of feeling like a human being, you just feel like a spectacle. And by the end of the video you see that all the microaggressions do pile up, and by the time I am lying in bed and ready to sleep all I can think about is all of these voices that followed me throughout the day and continue to follow me throughout the next day and the next day and…”

The two-hour public panel discussion addressed how microaggressions are manifested, and how everyone should be part of the conversation to bring them to light. It included John Queen, president of Bayside H.O.Y.A.S., Carese Bates, assistant director of Intercultural Affairs, Nakia Johnson, area coordinator from Residence Life, and students Do, Azziz Sideh ’20, and Jalelewak Tolessa ’19. Microaggressions sometimes can be hard to recognize, the panelists noted.

“Like when someone asks to touch your hair,” says Hall. “It’s a very small, natural thing … but say you’re in a predominately white area and someone touches your hair, or asks to touch your hair, and you’re the only colored person there or one of the only colored people there. You don’t see that as a microaggression initially, but then you sit back and think, they want to touch my hair because I’m different. Because my hair is not what they’re used to seeing. Because I’m potentially ‘exotic.’ So it comes with a lot of different implications you don’t think about. And a lot of the times a microaggression usually doesn’t stem from a bad place. Sometimes it really is just genuine curiosity, but it’s the way in which you approach that curiosity that can turn it into feeling like a degrading of who I am, or who a person of color is.

“It has a lot to do with context and what’s going on around you. It’s a thin line and it’s hard to figure out what is what depending on the situation,” Hall says.

The third element of the students’ project is a petition on change.org, seeking to develop and implement annual racial bias training for students, faculty, and staff by 2025. As of late April, 359 people had signed toward a goal of 500.

“We’re calling people to action, to mobilize, to sign this petition so we can get some action done,” Hall says. Already she and others are pleased with the response. “That in itself makes a statement, that it is wanted and it is necessary, and it’s not just current students who have signed the petition, its parents, alumni, faculty, and staff, so we have a good range of people who have been here and who are here and who say it would be helpful.”

To sign the petition on change.org, go here: http://bit.ly/2PvuUzB

To report incidents of racial bias, contact the Office of Intercultural Affairs

or Public Safety at https://www.washcoll.edu/offices/public-safety/anonymoustips.php .