The Guru of Green

Washington College’s new director of sustainability hopes to lead the College toward becoming one of the nation’s greenest. 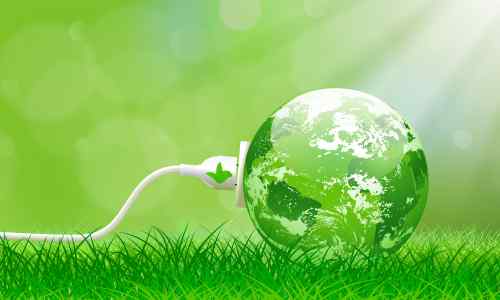 Greg Farley didn’t start his career as what he calls the “we-need-to-recycle-that-please-turn-off-your-lights guy,” but it wasn’t a long stretch from his work as a biology teacher at Chesapeake College. The science, he says, “demands that you do something.”

So Farley has been doing something—helping Chesapeake College become a regional leader in renewable energy use, stormwater management, and resource conservation—and now he’s bringing that something to Washington College. In February, he assumed a newly created position as director of sustainability, in which he will work closely with operations and administration to help the College align environmental and financial sustainability as it continues to move forward.

“The climate change science is devastatingly clear,” Farley says. “So the science drives what I want to do, which is try and fix it before it’s too late.”

Farley grew up south of Boston but calls himself a “fully naturalized southerner,” having earned his undergrad degree at Duke University and his masters at Florida State University. He studied invertebrate zoology, evolutionary biology, and marine science, and in 2003, Chesapeake College hired him as a junior faculty member teaching biology. That’s where he started noticing problems he thought he could help solve.

“We were generating about 31,000 plastic bottles every month from vending machines and other sources like the cafeteria and bookstore,” Farley says. “And we were taking them to the trash. So, I assigned some students an honors recycling project—go fix that—and that got some people’s attention, and it got the institution thinking about some things. So that kind of grew into my avocation, instead of just my teaching position.”

That avocation came into full flower after a sabbatical leave in 2011, when he studied at the Sustainable Living Institute of Maui, part of the University of Hawai’i Maui College.

“They were leading the charge for full-bore sustainability on that particular island,” he says. “I went out and studied with them for six months and tried to bring that back to Chesapeake.”

When he returned, he became the director of Chesapeake College’s Center for Leadership in Environmental Education, where he worked to bring the concepts and actions of sustainability into the classroom, across the campus, and throughout the larger community. Using a variety of methods, the college trimmed energy use by about 30 percent. Then, under a PPA (power purchase agreement) with Solar City, the college developed a two-megawatt solar array that, in its first year of operation, saved $85,000.

“When we reconciled with the power company we had saved enough for two faculty salaries,” he says. The college is adding another megawatt of storage, he says. “On a good sunny day, we can run the entire campus off solar.”

As he starts his new position at Washington College, Farley’s initial focus will be generating cost savings from energy reduction and using alternative energy sources. At the same time, he hopes to raise energy consciousness so that it’s an ingrained part of campus culture as staff, faculty, and students become more aware of how their everyday actions can help conserve energy, lower costs, and ultimately benefit the bottom line and the environment. For instance, he says, along with obvious things like turning out the lights when you leave a room, unplugging computer and phone chargers from the walls when they’re not in use can dramatically cut “vampire” load, which can be up to 20 percent of a building’s energy use.

Other small, simple changes could be using one mini-fridge in a suite instead of two or three, and unplugging fridges overnight so they stay cold but don’t run. Televisions that run 24/7 in Hodson, for instance, could be turned off overnight when they’re serving very few people. Likewise, vending machines don’t need to run 24/7. Rethinking landscaping and planting can reduce lawn-mowing. Even though Chesapeake College doesn’t have a vehicle fleet, Farley says, five percent of its carbon footprint was through gasoline—all of it for lawn mowers and leaf blowers.

“And we’re using technology that’s 50 years old. It’s a small internal-combustion engine on a backpack. It’s not efficient. There’s better equipment we could be using that would be less detrimental to the person who has the wear the thing. So let’s think differently about that stuff too. … This is the stuff I enjoy, keeping abreast of the coming technologies that will help us.”

Farley was excited to learn that the College has already switched to LED lighting, a project that is saving 1.2 million kilowatt hours annually. Along with material savings—LED lamps last as much as 10 times longer than fluorescent ones for, example—the dollar savings is $145,000.00 per year, says Reid Raudenbush, construction project manager. A $200,000 Delmarva Power rebate helped ameliorate some of $1 million cost for the project, which should take about six years to reach the return on the investment.

The College’s geothermal system is also extremely energy-efficient. Using the earth’s constant 55-degree temperature, fluid pumped through 300-foot-deep wells is heated or cooled, then used to heat or cool buildings. Geothermal fields serve William Smith Hall, the Miller Library, Cromwell Hall, the Hodson Dining Hall, and Chester, Sassafras, and Corsica residence halls, Raudenbush says. The new Hodson Boathouse and the Semans-Griswold Environmental Hall will be geothermal, and the Cullen residence hall is being designed for geothermal as well.

Farley says he hopes ultimately to make Washington College one of the greenest in the country.

“We need to make that obvious to consumers, that this is part of the College’s mission, and just the simple act of doing that can make the rest of the institution understand, hey, this is important. This is a part of our culture… Once you make inroads into the conversation,” he says, “it’s not hard to envision that’s something we could do.”