Through four experiments they are teaching this year at Kent County High School, chemistry professor Anne Marteel-Parrish and several of her students are introducing local high school students to the principles and benefits of green and sustainable chemistry. 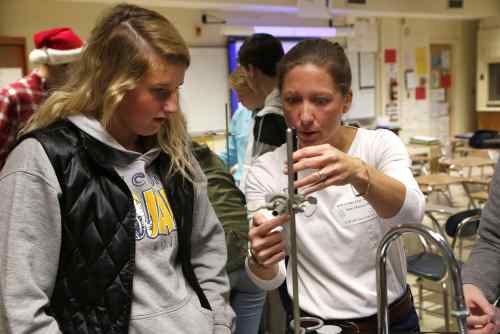 Gathered around a lab station in a Kent County High School classroom, Alex Riedel ’18 and three high school students are busying themselves with an experiment while discussing the future. One of the students says she wants to be a nurse practitioner, and Riedel, a Washington College biology major who’s pre-med and taking her MCATs in a month, is telling her about her experience shadowing a nurse who specializes in geriatrics.

“I love her patients!” Riedel says. “But I’m interested in pediatrics too.” While they talk, Riedel helps the students attach small glittery dots to a paper surface until they have completed what is roughly a diamond-shaped pattern. “Are you guys ready to move on?” she says finally, bringing the focus fully back to the reason they’re there—a green chemistry experiment crafted and led by Anne Marteel-Parrish, professor of chemistry and co-chair of the College’s Department of Chemistry, and six of her students. “OK, next we have to test the different surfaces.”

What they’re testing is how well their creation—a coarse model of a material called Sharklet film—can hold onto a Post-It note as small binder clips are attached to it. The broader technology they are learning about—Sharklet—is a product that mimics on a molecular level the skin of a shark, enabling it to easily repel germs and bacteria from surfaces without the use of chemicals. In this lab, it’s giving Marteel-Parrish and her students a chance to introduce the Kent County students to several concepts related to her fundamental expertise and passion: green chemistry and engineering.

“Green chemistry is all about trying to prevent pollution before it’s formed,” Marteel-Parrish explains to the students during her introduction. While using chemical-based cleaners may purge a surface of germs or bacteria, those chemicals enter humans and the environment, causing all sorts of unintended consequences. Through green chemistry, she says, “We are trying to design everyday products so they don’t harm the environment or people.”

Sharklet technology is an example of biomimicry, Marteel-Parrish explains—when scientists mimic something that occurs in nature. In this case, the inventor realized that the skin of sharks, comprised of denticles in a distinct diamond-shaped pattern, acts as a natural repellent.

Sharklet film is now used on all kinds of surfaces, from medical devices to furniture, to repel germs and bacteria. “Nature is a model and mentor to solve human problems,” Marteel-Parrish says.

Marteel-Parrish, since 2011 the College’s Frank J. Creegan Chair in Green Chemistry, is also the author of Green Chemistry and Engineering: A Pathway to Sustainability (2013, Wiley and Sons). Among many other awards, in 2011 she won the American Chemical Society-Committee on Environmental Improvement (ACS-CEI) Award for Incorporating Sustainability into Chemistry.

She’s also a mother of two students in Kent County’s public schools, and while she had devised a variety of special projects at the elementary school level, she’d never focused on high school students. Last year, she approached the science teachers about introducing their students to green chemistry through a series of four experiments, which she and her undergraduates would present. They gave an enthusiastic thumbs-up to the idea, and she worked with them to develop experiments that complemented what their students were already learning.

“I can teach the same concepts they are talking about, but from the perspective of green chemistry,” she says. “We’re trying to incorporate experiments that fit into their curriculum. I’m not here to tell them what to do, I just want to share my passion.”

But it’s clear that the collaboration is doing more than introducing local high school students to green chemistry concepts. It’s a fun, no-pressure opportunity for them to ask the WC students what college is like and what their future might hold, and for Marteel-Parrish’s students to impart some hard-earned advice, and encouragement.

“You guys did awesome!” Riedel says, as she helps her lab students finish up their work. “It was so fun getting to know you!”