Billy Murphy ’15 is heading for the University of Maryland’s School of Pharmacy after three years of study in Chestertown. 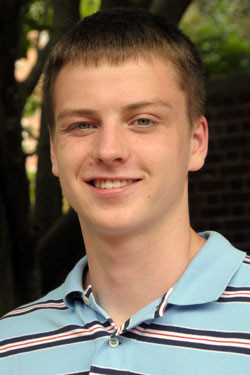 Washington College wasn’t even on Billy Murphy’s map when he started looking for a place to embark on his chosen career in pharmacy. His attention was focused on big universities—Auburn, Penn State, Rutgers—when he received a letter introducing him to WAC.

What caught his eye, he says, was the College’s dual-degree program that made it possible to finish his undergraduate work and get a bachelor of science in three years from WAC, followed by graduate work in pharmacy at the University of Maryland’s School of Pharmacy in Baltimore.

“I thought this program looked the strongest of them all,” he says. “Maryland is one of the top-ranked pharmacy schools in the country.”

Murphy, who throughout high school had a strong interest in chemistry and the sciences, had already decided that he wanted to put his skills toward a pharmacy career. He credits Martin Connaughton, associate professor of biology and co-chair of the department, with helping guide him through the process of attaining his undergraduate degree in three years, as well as making sure he got the prerequisites needed to apply to UMD. “He really lays out what you have to do,” he says.

After graduating from WAC in May, he’s on his way to UMD in the fall to begin his doctor of pharmacy degree.

“I’m pretty excited for being in the city,” he says. “It’s going to be a big change, but I’m looking forward to it.”