“May we never stop loving, giving support, and caring for the arts and for those who live within them,” says Moran, on winning the nation’s largest undergraduate literary prize. 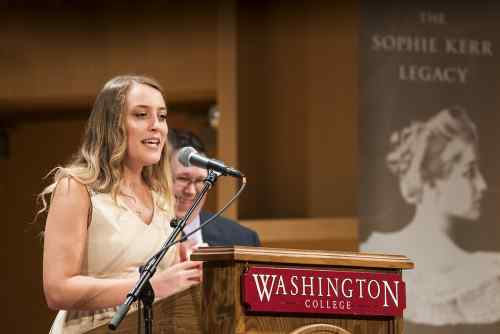 Shannon Moran, an English major from Baltimore with minors in music and creative writing, has won the 2019 Sophie Kerr Prize, this year worth $63,912. Moran, whose poetry and prose “deftly relates issues of gender, trauma, and the body,” accepted the award at Washington College this evening.

“This dream was built on four years of hard work, dedication to a craft, and a love for it. Thank you for every single person who has helped me become a better writer,” Moran said on receiving the award. “May we never stop loving, giving support, and caring for the arts and for those who live within them.”

Shannon Moran, the 2019 Sophie Kerr Prize winner Credit: Matt SpanglerThe poetry editor for student literary review The Collegian and the blog and social media editor for the student newspaper The Elm, Moran frequently examines the body and its relationship to familial and romantic relationships through her poetry and prose. Several of her poems address in searing understatement the lasting trauma of sexual assault.

“The committee found Shannon’s poetry to be unforgettable and remarkable in its impact and coherence,” says Sean Meehan, Chair of the Department of English and the Sophie Kerr Committee. “We marveled at the creative and intellectual integrity of the work overall, the ways that she deftly relates issues of gender, trauma, and the body across her poetry, her senior thesis on Renaissance tragedy, and a screenplay. Amongst an impressive group of finalists, and a very strong field of Washington College writers graduating this year, the committee recognized in Shannon a writer already creating publishable work, and with great promise for her future literary efforts.”

Now in its 52nd year, the Sophie Kerr Prize is the nation’s largest undergraduate literary award and is conferred annually to the graduating senior whose work shows the most “ability and promise for future fulfillment in the field of literary endeavor.” Moran was chosen among six finalists who represented majors across the liberal arts including political science, English, music, and Hispanic studies.

Moran is a member of the College’s vocal group WACappella and a sister of Alpha Omicron Pi. Her poems frequently visit the theme of the body and the trauma of assault. In “Persephone Sings Drunk Karaoke” she writes: “She forgets the sounds/of earth/cracking/sky turning to/void/fingers wrapped around wrist./She steps up to a microphone and clears/submission/from her larynx./She screams/Man, I feel/like a woman.”

In her poem “list of texts i typed but never sent to my mother on the day of Dr. Christine Blasé Ford’s testimony,” she writes: “1. I haven’t gotten out of bed yet/2. Do you know?/ 3. Send pics of the dog :)/4. If one in every four women is sexually assaulted, what did you think would happen when you had four daughters?”

After graduation, Moran intends to take a gap year, spend some time exploring her art, and then attend graduate school.

A video clip of the announcement is here: https://youtu.be/_-dhnRWvlVY

About the Sophie Kerr Prize and Legacy

Eastern Shore native Sophie Kerr published 23 novels, hundreds of short stories, and even a cookbook. When she died at 85 years old, she bequeathed the College a half-million-dollar trust fund, requiring that half of the annual earnings go to a graduating senior who shows the most promise for future literary endeavor. The other half funds student scholarships, visiting writers and scholars, and library books. Through this remarkable gift, Washington College has been able to host some of the nation’s most gifted writers, as well as provide its students with extraordinary opportunities to explore their creative potential in writing and literature. Learn more at http://www.washcoll.edu/departments/english/sophie-kerr-legacy/.