Recycling the Stuff of College Life

At the Move-In Market held in Hodson Hall Commons, students find treasures for their dorm rooms among last year’s cast-offs. 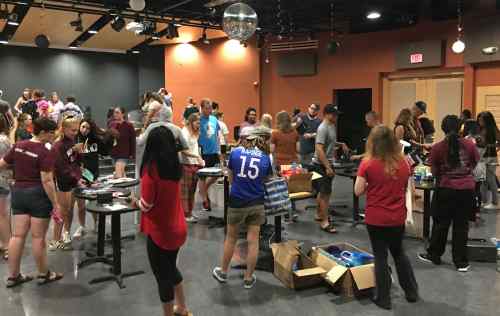 In an ongoing effort to reduce waste and improve sustainability on campus, the Student Environmental Alliance (SEA) hosted its second annual Move-In Market in early September. All of the goods had been acquired last April, when SEA and Residential Life hosted a Dorm Room Donation Drive to collect unwanted items including furniture, kitchenware, electronics, clothes, books, and nonperishable food. From late April until move-out day, Residential Life staffers encouraged students to contribute items rather than throw them away, while SEA members tirelessly collected donations that would find new homes.

After the donations were collected and sorted, the SEA boxed and sealed all of the furniture, small electronics, décor, and kitchenware in compostable bags, and stored them in the Chestertown Armory over the summer. Any donated clothing, shoes, or books were given away to members of the Chestertown community. All collected school supplies were given to local elementary schools, while the nonperishable food items were donated to the local food bank. Mini fridges and microwaves were passed along to Intercultural Affairs—to be donated to the incoming class of Washington’s Scholars. Some items were also donated to local victims of a fire in critical need of assistance.

That hard work paid off this fall for 115 students who came to Move-In Market Day to snag free desk lamps, kitchen supplies, Swiffer Sweepers, trash cans, fans, and more. While many were happy simply to save money on college necessities, they also took satisfaction in supporting SEA’s waste reduction goals at large.

Rose Adelizzi ’19, of the SEA, spoke of the laborious, but thoughtful endeavor that so many people across campus supported—from SEA organizers and volunteers to staffers in Residence Life, Public Safety, Buildings & Grounds, Intercultural Affairs, and the Director of Sustainability, Greg Farley, who advised SEA to use compostable bags, rather than plastic trash bags, for storage. And even what students passed over found a home.

“All leftover items were donated to the First United Methodist Church,” Adelizza says. “I think it’s safe to say that we met our goals to reduce waste at the end of the year and encourage student to reuse items the following year!”