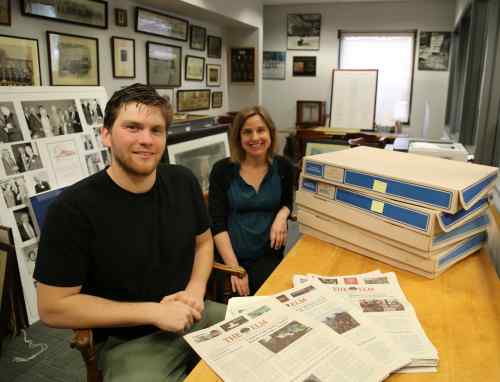 Partisan politics on Washington College’s campus has followed the national trend of becoming more polarized over the last 20 years, according to new analysis by Noah Gonzalez ’19, an economics major with minors in math and accounting and finance, who conducted the independent research through the Friends of Miller Library Ralph Thornton Fellowship.

Gonzalez presented his work to the Friends of the Miller Library (FOML) and others in early April. It’s the sixth year that the FOML have granted the $1,000 award, which the group launched in 2012 to celebrate the reopening of the newly renovated Clifton M. Miller Library. Funded through a gift from Ralph Thornton ’40, the award’s goal is to encourage students to use Miller Library’s print, online, and primary resources to conduct research.

Gonzalez says he became interested in the project after taking an economics class in which he learned how to use a data analysis tool that can analyze surveys in which two or more elements are referenced to develop more nuanced information. Intrigued by the larger national conversation about partisan polarization, he wondered if he could conduct a survey of students asking their political identity and if and how it affected how they responded to certain questions.

Since the fellowship is contingent on using Miller Library resources, he took the research one step further by examining 20 years of opinion pages of The Elm in the library archives for evidence of partisan polarization. He looked specifically at letters to the editor, as well as op-eds, to document whenever a topic relating to politics came up, as well as its subject, tone, and political inclination.

Gonzalez found that between 1998 and 2001, there was little discussion of politics in The Elm, and that op-ed writers were more focused on issues of faculty tenure and other more local matters. That began to change in 2002, when a feature called “Point/Counterpoint” was introduced in which a Democratic student and a Republican student would square off to discuss political issues. By the mid-2000s, the political conversation became much more active, with 32 pieces being published in 2004-05, 16 from a Democratic point of view, 14 Republican, and 2 other.

The conversation remained active in The Elm from the mid-2000s through 2014, when it began to wane. By 2016, the Point/Counterpoint feature was dropped, and during that divisive election year, there was no interaction between Democratic and Republican voices in The Elm’s op-ed pages. And, while Democratic voices had generally outnumbered those of Republicans in the pages over time, that disparity became much wider. By 2017-18, although the number of pieces jumped back up to 36—the most opinion pieces published in any year—32 of them were from the Democratic point of view, none Republican, and 4 other.

Coupling this research with results from his survey of 207 students, Gonzalez found that just over 50 percent of students identify as Democrats, 16 percent Republican, and nearly 31 percent as other. His research also found that statistically, more students who identify as Democrats have blocked more people on social media as a result of their political reviews than their Republican and Independent counterparts.

Gonzalez himself identifies as a Democrat, but he says the recent lack of Republican and Independent voices on campus and in The Elm is troubling.

“I’m not the biggest Trump fan at all, but if someone were to say something positive about Trump and they just get hit with all this negativity, the Democrats aren’t doing anything to help themselves. They’re not convincing anyone to re-evaluate what they’re doing. It’s just completely negative,” he says. “I’m always frustrated with how people argue, because people never seem to change anybody’s mind.”

Past recipients of the FOLM Ralph Thornton Fellowship have studied Sophie Kerr, Navajo literature and identity, the history and psychology of magic, the World War II letters of Doris Thistle Bell, and an examination of Adam, Eve, and Satan as portrayed in Paradise Lost. Examples of resources used include the Early English Books Online database, the library’s Delario Magic Collection, the American Broadsides and Ephemera online resource, and primary source materials from the Washington College Archives.