After exploring the material culture of the American Revolution over spring break, Jiahan Liu ’19 is going for a full immersion during an internship this summer in the forge and armoury at Colonial Williamsburg. 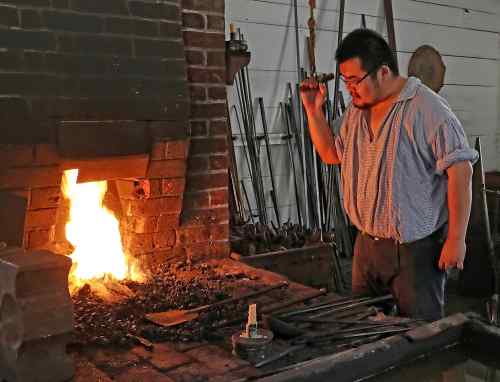 When Jiahan Liu ’19 traveled with a handful of other students to Colonial Williamsburg over spring break, he walked away from that inaugural program in hands-on archaeology of the American Revolutionary era knowing one thing for sure: He wanted to do more of that. He found that opportunity this summer as an intern, spending six weeks working in Anderson Blacksmith Shop and Public Armoury at Colonial Williamsburg.
Dressed in period clothing, as is everyone who works and volunteers in Colonial Williamsburg, Liu, an anthropology major with a minor in Asian studies, has spent the first half of summer forging a range of tools and implements, from spoons and ladles to S-hooks and trivets.
“I like it. It’s really enjoyable,” Liu says. “I believe one of the most important ways to understand anthropology is to immerse in a culture. If I can live like an 18th-century blacksmith, I can better understand the life and culture” of Colonial Americans.
Liu was among the first group of students to take part in a new collaboration between Washington College and Colonial Williamsburg. The intensive, two-credit, weeklong course in mid-March began with preparatory sessions at the College. Then students and faculty traveled to Virginia where they went behind the scenes in Colonial Williamsburg’s collections with curators to learn trades first-hand in various workshops. They spent time in the blacksmith shop at the public armoury and tried their hands at tinsmithing, carpentry, gunsmithing, leather work, and more. They prepared some of their meals over an open hearth and spent a night in a military camp.
The concept, says John Seidel, director of the Center for Environment & Society and associate professor of anthropology and environmental studies, was to gain a deeper perspective into the daily lives and work of the people who were fighting in the Revolution by applying experimental archaeology and period technical skills.
“You can study this from the history books, even better, you can get into the original documents,” Seidel told the Virginia Gazette. “And you can read about what people did. It’s so different, though, when you read about making a common everyday item like an S-hook here, and then actually sitting here and having to do it.”
For Liu, who hails from the city of Dongying in Shandong Province in northern China, the ability to “become” a resident of Colonial Williamsburg, working and talking with visitors as part of the community, helps him better understand the culture and history of this country, which also informs his understanding of contemporary America.
“It’s like living history, it’s really interesting,” he says. “Living as a blacksmith I have to wear a costume, and it feels like I’m living here.”
While at Washington College, Liu worked in the GIS Lab for three years and served as a teaching assistant for Chinese last year. In Williamsburg he has also taken the opportunity to visit neighboring Jamestown and Yorktown. After graduation, Liu wants go graduate school to continue to study American Colonial culture.
Meanwhile, Seidel this summer earned the Colonial Williamsburg Fellowship through EXARC, the international organization of experimental archaeologists and archaeological open-air museums. The one-month residency at Colonial Williamsburg will enable Seidel to work in the forge and Colonial Williamsburg’s collections to expand his research and the programming opportunities for undergraduates.
“This course we ran in March we ran was so successful that I want to develop something larger, and Colonial Williamsburg wants to as well—a formal course or other programming like collaborative internships,” Seidel says. “I will be using the fellowship to pursue my own questions about material culture and the American Revolution, as well as nurture a stronger relationship between Colonial Williamsburg and Washington College.”