During her summer internship with the Overfalls Foundation in Lewes, Delaware, Samantha Robinson ’21 learned about a unique aspect of American maritime history while helping educate visitors and archiving information. 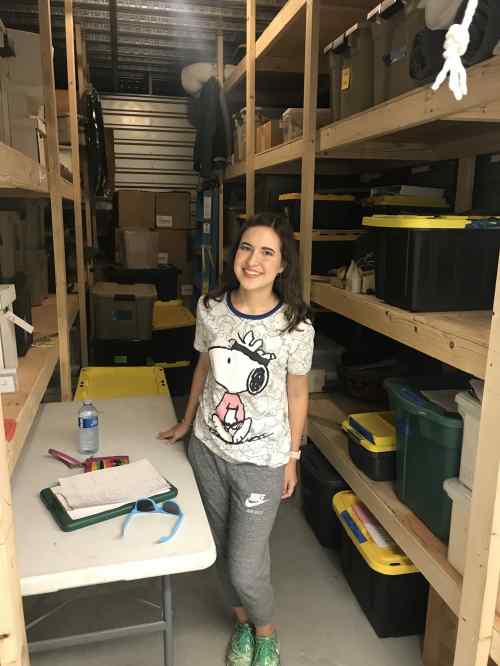 During her summer internship with the Overfalls Foundation in Lewes, Delaware, Samantha Robinson ’21 learned about a unique aspect of American maritime history while helping educate visitors and archiving information.

It may be hard to imagine in this era of pin-point GPS accuracy and satellite technology, but there was a time not too long ago when the safety of ships and seamen navigating the American coast depended on a handful of people and lighthouses that floated—known as lightships. During her summer internship in Lewes, Delaware, Samantha Robinson ’21 learned firsthand the story one of the nation’s few remaining lightships, called Overfalls.

“Most people start off the tour with, ‘What is a lightship?’ because people don’t know,” says Robinson, a history major who is considering a double major in computer science. “I had to learn about the Overfalls itself, and there’s a lot of boat terminology and concepts you have to know. I also learned a lot about Coast Guard history.”

Anchored in dangerous or navigationally significant areas, lightships served as floating lighthouses, foghorns, and radio beacons for navigation between 1820 and 1983. They were manned by small crews that spent long, lonely hours at sea going nowhere. The duty was dangerous and hard; crews suffered all manner of violent weather, they were targeted by enemy forces during WW II, and since ships purposely homed in on their signals, there were countless close calls and over a hundred collisions, five of which sunk the lightships that were hit.

Robinson worked for the Overfalls Foundation, which formed and has worked for the restoration of a lightship that began its service in 1938 at the east end of Long Island Sound, later moved to Cross Rip near Martha’s Vineyard, and ended its career in 1972 at the entrance to Boston Harbor. In 1973, the Coast Guard donated the ship to the Lewes Historical Society, which named her in honor of the lightships that served at the Overfalls station at the exposed and often unruly mouth of the Delaware Bay. The ship is a National Historic Landmark, now fully restored and the undisputed centerpiece of the public park along the Lewes and Rehoboth Canal in Lewes.

During her internship, Robinson learned all this history and more, doing a little bit of everything. Using her computer skills, she helped catalog artifacts and photographs, improved record-keeping, and helped with social media. She worked as a docent in the foundation’s welcome center answering phones and providing information to visitors. She helped archive materials that the foundation had in storage, gaining access to pieces of history that most people don’t get to see. And, once she got up to speed on the Overfalls’ history, she worked as a guide onboard the ship itself.

“We usually started with lightship history and then moved to the bow, and then I would talk about the foghorn and the light and all of that, and move around the main deck and eventually to the crew deck. We’d see the crews’ quarters, the galley, and the officers’ quarters,” Robinson says. “A lot of people were interested in the galley—we have a menu listed there and the food sounded really good. The cook was the most prized member of the crew.”

Robinson also met a few people who worked on the lightships at the Overfalls station.

“I got to ask them questions about what it was like and what motivated them to work on the ship,” she says. “It was difficult, definitely, more than the average ship because they were kind of out in the middle of nowhere for weeks at time.”

She also helped the neighboring Delaware River and Bay Lighthouse Foundation with similar electronic cataloging and organization. During her internship, Robinson stayed at the Lewes home of one of the foundation’s board members, Tracy Mulveny. She was able to walk to the ship for work, as well as to downtown Lewes and the beach nearby.

“She did a lot of diverse things and we used her talents with social media, all of her internet experience and computer skills,” Mulveny says, noting that Robinson also helped with the foundation’s big summer outreach event. “She helped many of us get different things working better. We loved having her.”

Robinson learned about the internship through recently retired dean Andrea Lange, who knew she was interested in history and thought this might be a good fit. She received a stipend through the Hodson Trust. While she liked working with visitors to the ship, archiving was her favorite part of the internship, an insight she says will help her as she continues her education and looks toward her career.