Head in the Cloud

A computer science and mathematics graduate is working for Amazon’s Route 53, a DNS system that is part of its cloud computing platform. 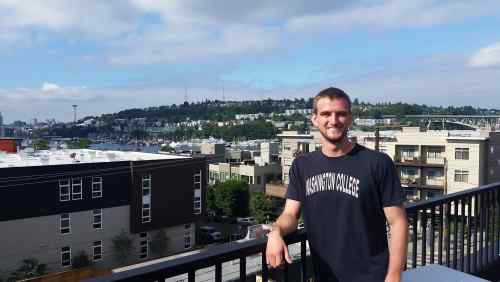 Greg Lee '15 never saw himself working for a tech giant like Amazon.

In late 2016, however, the computer science and mathematics major was motivated to try it. Next thing he knew, he was out in Seattle for an on-site interview.

“The rest is history,” he says. “It really came from sort of just an internal desire to push myself and try to challenge myself to new limits.”

The team is very technical, he says, but the big picture is providing products “that let enterprises use the cloud to make using technology significantly easier.”

“As a software development engineer, I write codes to add new features to the product, I maintain the existing code, and then, as one of the Amazon-specific or unique things that we do, we also are operators for the software and the service.… It’s a full, all-encompassing ownership of the service we’re creating,” he says.

At Washington College, Lee took on multiple leadership positions. He says that his roles as president of Kappa Alpha and as captain of the swim team gave him the personal and leadership skills necessary for working with people on a day-to-day basis.

His undergraduate course of study applies directly to his work at Amazon, he says.

“By the end of my time at WC, I was able to really extract every possible benefit of learning and learning how to learn from my studies in computer science and mathematics,” he says.

“It was definitely applicable to some of the things I go through on a daily basis, especially at Amazon,” he says. “The pattern of conceiving an idea, writing that down, and then preparing yourself for feedback is critical.

“And then, from there, to take that idea and make it happen is particularly prevalent in software engineering,” he says. “It was really great experience of what it means to create something from scratch.”