Getting Their Feet Wet

Students who want to learn what it’s like to be an environmental educator can get first-hand experience in a new course that lets them shadow educators at nearly a dozen partnering organizations on the upper Eastern Shore. 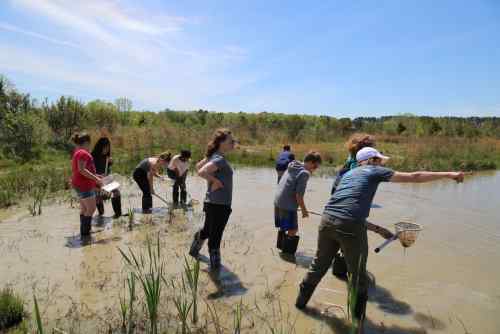 Few sixth-graders can resist the opportunity to go mudlarking in a marsh, but what about when they get stuck? Or fall in?

Then it’s up to the teacher to help—or, in this case, Abby Frey ’19, who is shadowing the teacher, because Devin Herlihy, a seasonal educator at Pickering Creek Audubon Center just outside of Easton, has her hands pretty full with the rest of the class that’s happily wading through the wetland in search of frogs, tadpoles, crayfish, dragonfly larvae, and myriad other wonders of springtime.

Helping a youngster up from the mud is all part of the experience of shadowing environmental educators, which Frey, along with about ten other Washington College students, are doing this spring throughout the upper Eastern Shore. It’s part of a one-credit course, Environmental Field Experience, that helps them get a feel for what being an environmental educator might be like as a career.

“It’s opened my eyes to the different ways environmental education works,” says Frey, an environmental studies major with a minor in public health. She has shadowed school groups in various settings, participated in public outreach events including public paddles (her first time in a canoe) and the center’s annual plant-and-seed swap, and even gotten a feel for the kind of office organization needed to operate a place like Pickering Creek, a 400-acre waterfront property whose owners donated it to Chesapeake Audubon Society in 1982. “It’s been interesting to see the different age groups. These are sixth-graders today. The last time it was high-schoolers, and the vibe was different.

“Some of the people at the canoe event were older and had no experience in canoes,” she says. “So the whole thing changes with the age group, which makes it interesting.”

This spring is the second semester for this new class, which came about when Brian Scott and Leslie Sherman, co-chairs of the Department of Environmental Science and Studies, approached Erin Counihan, coordinator of the College’s secondary education program and a National Geographic Certified Educator, with an idea. Many of their graduates were landing jobs involving educating the public, and they wondered if there was a way to collaborate with the Department of Education to help prepare students for what sorts of opportunities are out there.

Counihan said that such a course already existed in the secondary education program, in which students logged 20 hours during the semester observing teachers in the classroom, then journaled and reflected on what they’d learned. She simply had to tailor it to environmental education.

“If I find out a student has a passion for trees and wants to be a botanist, I will try to get them to go to Adkins Arboretum. Or if one has a broad passion to teach kids about the environment, I might send them to Sassafras or Echo Hill,” Counihan says. “They are asked to complete 20 hours, but once they get to their site they can determine what that looks like.” Some of them will shadow for a few Saturdays, while others go during the week when there might be an interesting opportunity, for instance when Shore Rivers goes to Talbot County schools.

Emily Rugg ’20, a double major in international studies and French studies, spent the spring shadowing the rangers at Tuckahoe State Park. Watching them interact with the public has completely changed her thinking about environmental education. A great example, she says, was shadowing the ranger one evening as she walked through the campground with one of the park’s barred owls. Everyone was captivated by the owl, and at each site, the ranger told the story of how this owl was blinded after being hit by a car. It had swooped down to catch a mouse that was eating an apple core someone had tossed from a car window.

“The way she was able to integrate that into every conversation we had with people who ranged from children and families and young adults and then older people, it was totally diverse, and everybody had the same reaction,” Rugg says. “One of the last people that we spoke to was a dad and his young son, he must have been four or five years old, and after we did this he literally turns to him and says, ‘All right! No more throwing banana peels out the window!’ ’’

Shadowing the rangers at Tuckahoe has shown her that environmental education happens in far more diverse places and ways than in a traditional classroom.

“This course has also made me realize any field I go into there’s going to be people willing to learn and people who need to learn, and I’m going to be in a positon of an educator, especially talking about environmental policy,” Rugg says. “I think that’s what’s so cool about this course, you’ve got such a diversity of host institutions and groups … it reinforces that idea that being able to be a successful educator, especially in the field of environmental science, will be beneficial no matter what career path you end up taking.”