Washington College celebrates the legacy of the Maryland-born human rights activist and the bicentennial of his birth, Feb. 23, 2018. 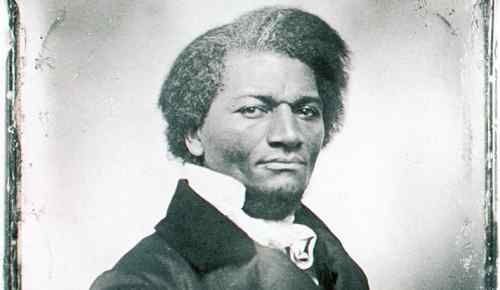 On the bicentennial of Frederick Douglass’s birth, Washington College is posthumously awarding him the honorary degree of Doctor of Laws. Douglass’s great-great-great grandson, Kenneth Morris, co-founder and president of the Frederick Douglass Family Initiatives, and David Blight, a professor of history at Yale University and director of the Gilder Lehrman Center for the Study of Slavery, Resistance and Abolition, will both offer remarks and receive the College’s Award for Excellence.

The free, public event, part of the annual George Washington’s Birthday Convocation, is slated for Friday, Feb. 23, beginning at 4:00 p.m. in Decker Theatre, Gibson Center for the Arts. The ceremony will also be livestreamed:  https://www.washcoll.edu/offices/digital-media-services/live/

“Two hundred years after his birth, it is truly an honor for Washington College to recognize the tenacity and the moral courage Frederick Douglass exhibited by speaking out in support of equal rights for all men and women,” says College President Kurt Landgraf.

Born into slavery in February 1818, not far from the College’s campus on Maryland’s Eastern Shore, Douglass came to understand at a very young age that education would be his path to freedom: “Knowledge unfits a child to be a slave,” he wrote. In 1838, he escaped slavery and spent the rest of his life speaking out on human rights issues, including abolitionism and women’s rights, in addition to serving as a federal official and diplomat. His first autobiography, Narrative of the Life of Frederick Douglass (1845), is taught in universities around the world. Yet Douglass himself never had a college education.

When Douglass was born, Washington College — the first college in Maryland and one of the oldest in the United States — had already existed for almost forty years. Among its founding donors, alongside George Washington, were members of the Lloyd family, on whose Eastern Shore plantation Douglass was enslaved during his childhood. The College remained a racially segregated institution until the late 1950s.

“Even without a formal education, Frederick Douglass steeped himself in newspapers, political writings, and treatises to become one of the most famous intellectuals of his time,” Landgraf says. “Washington College should have been thrilled to enroll such a promising scholar. We can’t change that history, but we can and should learn from it.”

The event coincides with Black History Month and a program organized by the College’s Office of Student Affairs, “The Black Experience: From Slavery to Modern Times.” Over the course of several weeks, students and faculty will engage in dialogue about contributions African Americans have made to our society, as well as the legacy of slavery that remains.  They will visit the Harriet Tubman Underground Railroad State Park and Douglass sites in Talbot County, as well as Cedar Hill, Douglass’s home in southeast Washington that is now a National Historic Site. For a complete listing of events commemorating Frederick Douglass’s bicentennial, visit https://www.washcoll.edu/offices/student-affairs/frederick-douglass-bicentennial/index.php

And Washington College is beginning to explore its own relationship with slavery. This spring, history professor Carol Wilson is teaching an advanced course that considers how our country’s early leaders, including George Washington, grappled with the problem of slavery even as they promoted the ideals of liberty and equality. As part of the course, students will research documents from various sources in an effort to uncover the little-known story of slavery and Washington College. On February 27, the Department of History is sponsoring a lecture by Erica Armstrong Dunbar, author of Never Caught: The Washingtons’ Relentless Pursuit of Their Runaway Slave, Ona Judge.

As part of the Douglass centennial activities on Feb. 23, members of the College’s Black Student Union will deliver copies of the Narrative of the Life of Frederick Douglas: An American Slave to eighth-graders at Chestertown Middle School. Joining them will be Ken Morris, a direct descendant of Frederick Douglass who will later accept the honorary degree on Douglass’s behalf. To honor Douglass’s 200th birthday, Morris’s family foundation is distributing one million hardcover copies of the book to middle-schoolers across the country.

The Frederick Douglass Family Initiatives is a modern abolitionist organization dedicated to teaching today’s generation about one of the most influential figures in American history and raising awareness about the ongoing crisis of human trafficking.

“Our message to young people today is that they have an obligation to get an education because of the contributions and the sacrifices our ancestors made,” says Morris. “Frederick Douglass never stepped foot in a classroom. He was completely self-taught. Imagine how he would have felt to have the same opportunities young African Americans have today. We also want inspire them through Frederick Douglass’s words and let them know that they can make a difference.”

As director of the Gilder Lehrman Center for the Study of Slavery, Resistance, and Abolition at Yale University, David Blight oversees the annual Frederick Douglass Book Prize and other public outreach programs regarding the history of slavery and its abolition. Blight is considered the nation’s foremost Douglass scholar; he recently completed the first major biography of Frederick Douglass in more than 20 years, which will be published later in 2018 by Simon and Schuster.