An internship in Cape Town, South Africa, taught Sidney Stone ’18 much about herself, as did the culture of South Africa’s townships and the challenges facing the young people living there. 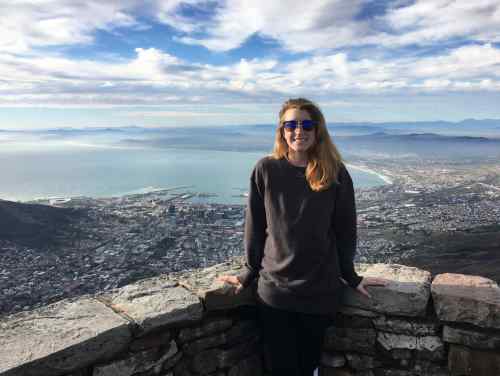 If the purpose of beyond-of-the-classroom experiential learning is to push students out of their comfort zones, then Sidney Stone ’18 can vouch that her internship last summer in Cape Town, South Africa, was an unqualified success. A double major in anthropology and psychology, Stone traveled on her own to South Africa to intern with SAVE, South African Volunteering Experiences, where she saw first-hand the poverty, violence, and social dislocation facing the people living in the townships.

“It was really intense. When I left, I was like, ‘Wow! I am so happy to be home,’ ” says Stone, who spent a month-and-a-half in Cape Town. “But at the same time, I really miss it. I had a great time, I made some great friends. I can’t really contact my kids because they don’t have social media, but I really miss the kids that I worked with. They were making great progress, too.”

Stone learned about SAVE through Julie Markin, associate professor of anthropology. Based in Cape Town and founded in 2006, the organization draws volunteers from around the world to help in broad range of capacities in six African countries, from working with wildlife to helping young entrepreneurs learn marketing skills. The Hodson Trust helped fund Stone’s travel from the East Coast to Johannesburg, then Cape Town.

“The internship made an impact on Sidney, as she applied what she has learned about cultural development and change through her major,” Markin says, “but also through how she reflected on her own development as a student and global citizen.”

Stone worked in a variety of ways. Her primary internship was working at a skills development workshop, teaching adults from the townships with limited internet access how to build websites and use social media to help market themselves and their businesses.

“I was teaching them how to use Twitter and Instagram, Snapchat if they wanted to,” she says. “One of my biggest projects was for two twin brothers who had finished high school. They really wanted to market their skills in traditional South African music, and they wanted to teach kids to use this music. They were super creative brothers, but they didn’t know how to market themselves very well. So it was my job to teach them how to use Facebook and how to make pages for themselves to get people to know who they are.

“There’s very limited access to social media in the townships,” Stone says. “Cell phone data rates are really high, and nobody wants to use a SIM card for that long. Your phone is mostly for emergencies, and a lot of people don’t have electricity to power up their phones so they don’t use them very often.”

Stone also worked for SAVE’s Adventure Surf Club, an effort to provide disadvantaged youth from townships in the Western Cape with positive after-school activities, including learning to swim, and for those who can swim, how to surf.

“I was learning to surf myself, so it was really, really fun to reach out to these kids,” Stone says. “They are all really intense, hormonal, agitated, not being taught the social skills they need by their parents.”

Stone also worked with elementary and middle school children in a township school called Zusakhe, where she helped students with everything from motor functions to social skills and language, which include English, Afrikaans, Zulu, and Xhosa. One of the most difficult aspects of her internship, she says, was the expectation that as an intern, rather than a volunteer, she would take the lead in keeping students in line.

“A lot of volunteers wouldn’t do it, they would just pass it off. But if a kid is messing around, you have to tell them, ‘You can’t do this,’ ’’ she says. “A lot of volunteers were just stand-by kind of people. I had to be the main disciplinarian and that was kind of disappointing because I didn’t want to be the bad guy with these kids. But someone had to … or they were just going to misbehave and get into some trouble when they’re home. It’s really easy to do that. Most of their parents aren’t really there to regulate them.”

When she wasn’t working in the townships, Stone and the volunteers were based in a hostel in a suburban Cape Town neighborhood. The juxtaposition of the townships to the rest of Cape Town was jarring, she says, as was the nature of the work and the immersion into the culture itself.

“I had never been so intensely active with a culture before,” Stone says. “This was not like a tour around some museum. It was, ‘Here you go,’ and they threw me in. I said, ‘I don’t know what I’m doing,’ and they said, ‘We don’t know what you’re going to do either, so do it!’ ’’

Stone admits that the internship was harder than she’d anticipated, and she was more homesick than she’d expected to be. That said, she also says she learned an enormous amount about herself in terms of controlling her fears.

“I learned I had to smile more and actually feel how lucky I was to be there,” Stone says. “I really valued that opportunity, and I needed to help myself feel that.”