Eye in the Sky

Using his experience in Washington College’s GIS Lab and Center for Environment & Society, Grant Twilley ’15 is flying around the world employing leading-edge technologies to map what lies beneath. 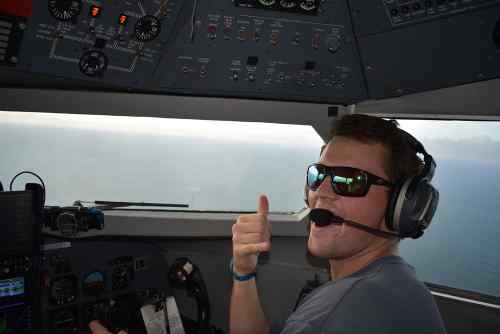 When he’s in a plane over the Sulu Sea in the Philippines or the tropical blue waters of Costa Rica, Grant Twilley ’15 isn’t thinking particularly about the skills that got him there. But as a specialist in LIDAR—Light Detection and Ranging—Twilley can point directly to his work with Washington College’s GIS Lab and Center for Environment & Society as the foundation for what has become his career.

Twilley, an environmental studies major and anthropology minor, works for the defense contractor Woolpert, which holds the contract to work under what’s called the JALBTCX—Joint Aerial Lidar Bathymetric Technical Center of Expertise.

“My primary function there is to collect, process, and analyze bathymetric LIDAR data,” Twilley says. “We use a special kind of laser, a special wavelength of light, that can penetrate through the water column.” What this essentially means is that Twilley spends lots of time in small planes, flying over coastal areas and using a laser scanner, cameras, and a specialized GPS receiver to collect precise data to measure the seabed. Bathymetric LIDAR uses green light, which can penetrate the water column as far as 50 meters, depending on clarity or turbidity.

“The laser starts from the plane, travels through the air and water, and once it reaches the sediment-water interface, or the seafloor, it bounces back,” Twilley says. “We record that time that it leaves the laser, touches the ground, and comes back, and divide that by two and that gives us distance, since we know the speed of light. And we do that 20,000 to 30,000 times per second. We can make very detailed maps of whatever might be below the plane, whether it’s a coral reef, the beaches along North Carolina, or the Persian Gulf.”

Twilley’s work produces detailed maps that can be used for a variety of purposes by a multitude of agencies, among them the Army Corps of Engineers, the Naval Hydrographic Office, the National Oceanic and Atmospheric Administration, FEMA, the U.S. Geological Survey, the National Park Service, and even schools, universities, and insurance companies.

Twilley learned about GIS when he took an introductory class his first semester with Stewart Bruce, the former director of the College’s GIS Lab. “He hired me at the end of his class, and I worked there for about two years.” While there, he worked on crime mapping and archaeology projects.

Then in the spring of his junior year, he took a class with Doug Levin, now deputy director and chief innovation officer for the Center for Environment & Society (CES). Levin hired him to work at CES doing STEM academic outreach and a summer bathymetric mapping project in New Jersey for the National Park Service on the College’s research vessel Lookdown.

During his senior year, Twilley started looking for jobs in GIS and hydrographic survey, and a month before graduation he landed a position with the engineering firm Gahagan & Bryant Associates (GBA), where he worked on hydrographic mapping for coastal beach nourishment projects. After two years there, he moved to Woolpert, with whom he has traveled to 20 states and internationally to Honduras, Columbia, Bahrain, Philippines, Costa Rica, and Africa. The company is also helping him get his master’s degree in GIS and remote sensing.

Twilley says he never expected this to be his career when he started at Washington College. He only knew he wanted to do something science-based. Working with Bruce and then Levin, and pursuing the opportunities they opened up for him, helped him find this path.

“I would have to give all credit to Stew Bruce who got me involved in this,” he says. “And Doug took it to a more specialized level by introducing hydrographic surveying to me, he let me work with him on that.”

He says the College’s small class sizes helped him focus, and he always felt that “everybody was for the most part pretty available for helping when it was really needed.” Hands-on experience through internships and out-of-the-classroom learning were key.

“It’s internships and capitalizing on whatever opportunities might come up, and really never doubting yourself that you can figure it out one way or the other,” Twilley says. “You don’t have be the smartest one in the room, but you just have to work harder than other people. I didn’t have the greatest GPA … You have to work hard and build good relationships and produce good work.”