Distinguished Teacher of the Year 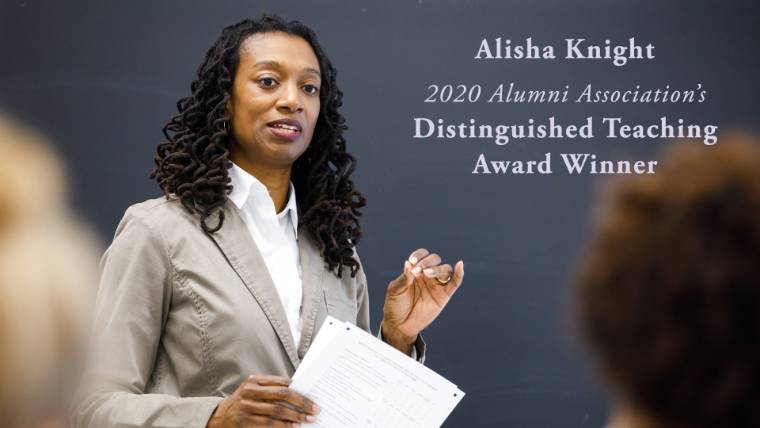 Alisha Knight, an associate professor of English and American Studies at Washington College who draws her inspiration from social historian Earl Lewis’s assertion, “Intellectual work is the foundation of social change,” was chosen to receive the Alumni Association’s 2020 Distinguished Teaching Award.

Provost and Dean of the College Patrice DiQuinzio made the announcement during the First-Year Convocation, held virtually on Aug. 21.

Knight, who specializes in African American literature and print culture at the turn of the twentieth century, says she aspires to empower students to become change agents. To that end, she developed a course, “Black Men & Women: Images of Race and Gender in American Literature and Culture,” to help students read racialized images much like literary texts. Her students learned to do this by identifying and analyzing contemporary versions of historical racial stereotypes in popular culture. Their work is represented in a digital exhibition available here.

Her own research focuses on the African American book publishing trade at the turn of the twentieth century. Specifically, she is researching the Colored Co-operative Publishing Company, a black-owned publisher based in Boston in the early 1900s.  Her work examines the peculiar nature of disseminating literature to African Americans at a time when many publishers either took this reading audience for granted or simply assumed it did not exist. “Putting them on the Map” is a digital humanities component of her larger project.

Her service to Washington College includes serving as the founding program director for the Black Studies minor, chairing the Service & Scholarship Committee, advising Cleopatra’s Sisters, and serving on the Tenure & Promotion Committee, the Honor Board, Phi Beta Kappa’s Members in Course committee, as Faculty Secretary, and as Faculty Moderator.