Anthropology major Kirstin Webb’s SCE examines the cultural and social factors behind why and how many people living in communities vulnerable to sea level rise perceive the reasons and the risk to their towns. 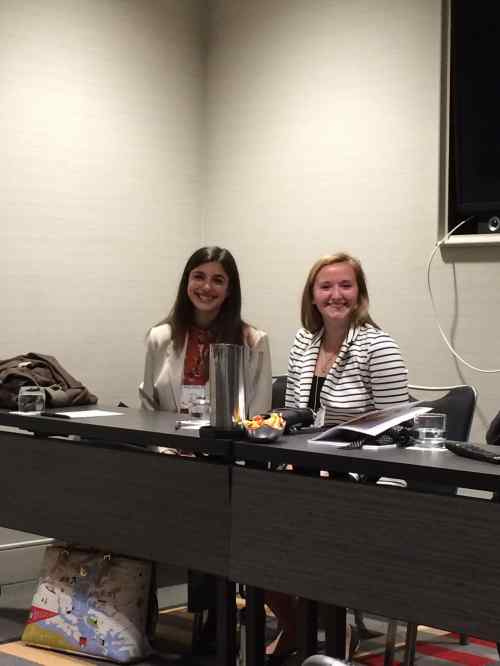 Last summer, Kirstin Webb ’18 took part in groundbreaking research about how people who live on Maryland’s lower Eastern Shore perceive the risk of sea level rise in their communities, and how planners can better communicate with those people when it comes to analyzing and responding to that risk.

Now, the anthropology major is delving deeper into that research to write her Senior Capstone Experience thesis about those perceptions and what cultural and historic foundations help contribute to them.

“Everyone talked about erosion as the primary issue their communities were dealing with when it came to risk. And it was pretty much universally disassociated from sea level rise, because most people we talked to didn’t believe in sea level rise,” says Webb. Her SCE examines “how people’s cultural and social background influences and informs how they perceive risks and select which risks to pay attention to … Analyzing discourse through interviewing and talking with these people, I tried to pinpoint specific cultural models and constructs that are based around their lives and the histories they have of living in this area to better understand how they are seeing these risks and how that is influencing their behaviors.”

The 15 interviews with which she’s working stem from her research last summer led by Aaron Lampman, chair and associate professor of the Department of Anthropology, and his colleague from Lehigh University, David Casagrande. Webb joined Hayley Hartman ’18, a double major in anthropology and environmental studies, and Seth Miller ’17, also a double major in anthropology and environmental studies, in traveling to vulnerable communities on the Eastern Shore of Maryland to conduct ethnographic interviews with local residents. They asked residents about their perception of the risk of sea level rise, how they are dealing with it now, and how they think they’ll deal with it in the future.

The information they gathered inaugurated a long-term project into risk perception in these low-lying communities. Last November, Webb presented her work at the American Anthropology Association in Washington, D.C., and in March, she and her colleagues also presented at the annual meeting of the Society for Applied Anthropology in Philadelphia.

For her SCE, Webb honed in on the question of why people choose the concept of erosion to define the risk to their communities to the exclusion of the science behind sea level rise.

“I looked at the cultural models and the socio-cultural factors that came out in our research that seemed to influence their perception of risk based on belief. I narrowed down on a sense of place, age, and religion as the main factors in that.” Cultural models that emerged included how people identified themselves as “survivors,” both of the economic hardship of their lives, as well as their community’s survival through historic disasters such as the Storm of ’33 and hurricanes like Hazel or Isabel.

“They formed an identity around that as survivors,” she says. “I think that, as well as the local ecological knowledge, especially from the multi-generational residents, really shaped these cultural models and colored the way they are looking at these risks.” She also argues in her thesis the concept of “community adhesion.”

“If you’re believing in the same things, you’re part of that group, and you’re rejecting that science-based paradigm that’s saying, ‘This is what’s happening to you, this is sea level rise.’ At the same time, where the nuance comes in is, I don’t think they’re entirely wrong. I think that erosion really is one of the primary issues they’re facing and that land loss … of course it’s exacerbated by sea level rise, but you can’t really focus on long-term if you’re having your land wash away every day, and you’re seeing it, and it’s tangible.”

For instance, she says, nearly everyone has stories about family members who lived on islands that are now long gone, whole communities that have had to move in the past because their islands washed away. In that sense, they are acknowledging a history of retreat as a necessary and inevitable adaptation. “But now that we have structural solutions, that’s why they’re asking for them. They want to put up these jetties and sea walls and rip rap barriers to protect their island. Because they seem to think if that’s what they do, they will be able to protect their island and stop the erosion and stay where they are.”

After graduation in May, Webb is interning with the National Oceanic and Atmospheric Administration in its Office of Risk and Social Science.

“I’m very excited because the project they have is about applying risk and communication research in the real world. It’s exactly what I want to be able to see, how it’s possible to do that based on this work that I’ve done,” Webb says. “It’s important, because if you’re making policy and decisions, you have to look at the science behind it, but just focusing on the science you’re missing so much. And you’re not going to be able to communicate that to local residents or work with them. So, taking into consideration local residents’ beliefs and perceptions and knowledge, too—because they do have long-term knowledge that’s very specific to their area that overall scientists don’t have—that should be incorporated in some of these decisions.”

After her work with NOAA, Webb will head to Lehigh University, where she has a TA position and a full scholarship to pursue her master’s degree in environmental policy.