Celebrating the Year of the Bird, Washington College announces a new scholarship for students pursuing interests in ornithology. 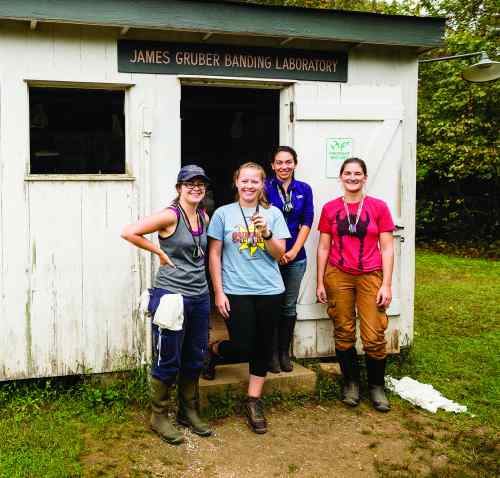 Marking the 20th anniversary of the Foreman’s Branch Bird Observatory and the Year of the Bird, Washington College has announced a new scholarship for students who are interested in the science and study of birds. The Washington College Ornithology Scholarship will be awarded to two students in the incoming class of 2023, providing each $1,500 a year for four years.

The scholarship will help students take advantage of the unique opportunities that Washington College offers in birding and ornithology at Foreman’s Branch Bird Observatory. The only observatory of its kind on Maryland’s Eastern Shore, Foreman’s Branch is one of the few places where undergraduate students can receive long-term, hands-on training in the technical skills needed for ornithology studies.

Since 2008, the station has provided paid internships to 26 students, who are closely taught the precise skills needed to band, identify, and record data about songbirds. Student interns spend an entire semester (and often much more) at the station learning these skills while being closely mentored by master banders. Scholarship recipients will get priority status for these internships.

Located on the College’s 4,700-acre River and Field Campus (RAFC), Foreman’s Branch is an Audubon-designated Important Bird Area. The expansive habitat at RAFC, and the fact that the observatory is not located at migratory bottleneck, draws an enormous diversity of species.

On average, the station bands about 15,000 birds of about 130 species every year, and as of January 2018, it holds North American age records for 10 species, including orchard oriole (11 years), American goldfinch (10 years, 11 months), hermit thrush (10 years, 10 months), and grasshopper sparrow (9 years, 1 month). Last September, the station, which celebrated its 20th anniversary in March, banded its 250,000th bird, a common yellowthroat.

The Washington College Ornithology Scholarship, which is funded by the College’s Center for Environment & Society, is being launched during the Year of the Bird, designated by the National Audubon Society, BirdLife International, National Geographic, and the Cornell Lab of Ornithology to mark the 100th anniversary of the signing of the Migratory Bird Treaty Act.

For more about Year of the Bird visit http://www.audubon.org/yearofthebird