At the Edge of America

In residence at the Starr Center as the 2018-19 Hodson Trust-John Carter Brown Library Fellow, writer Cam Terwilliger is finishing his first historical novel exploring the clash of cultures in 18th-Century America on the edge of the western wilderness. 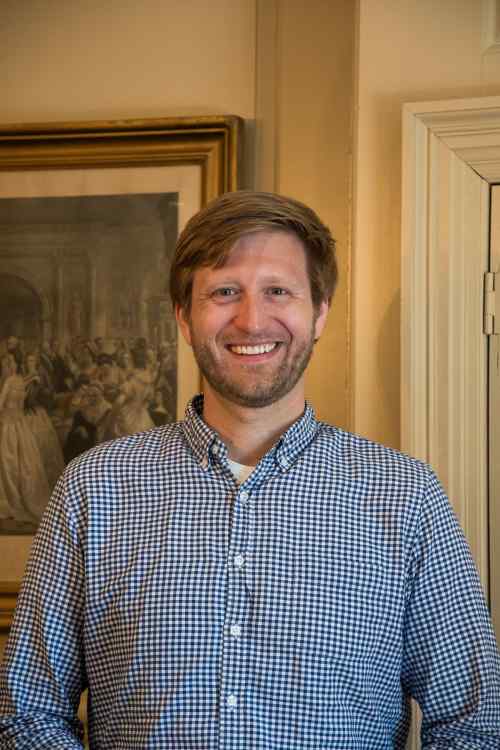 What was life like two centuries ago in the forested Iroquois country, a place where cultures met and frequently clashed?  It takes considerable literary skill to craft a historical novel that brings to life a society living on the edge of the Western wilderness. Evoking the beauty, danger, and wonder of the 18th-century American frontier requires a keen imagination, diligent research, an empathy for character, an affinity for place, and the ability to tell a good tale. Author Cam Terwilliger has honed these skills as he nears completion of his first novel, Yet Wilderness Grew in My Heart.

Set in New York and Quebec during the French and Indian War (also known as The Seven Years War), Terwilliger’s book reimagines the mythology of the founding of America, exploring issues of race, religion, capitalism, disease, landscape, the psychology of power, and the dense web of cultures that gave rise to the world we live in today.

The historical novel delves into an intermingling of cultures—Native American, European, and African—dramatizing the lives of the diverse characters who populate his story. The narrator is a wealthy physician who, suffering from syphilis, desperately seeks a natural cure in the fields and forests of the Hudson River valley. Then there’s a counterfeiter who escaped from slavery in New York City and is hiding out in the wilderness — and his wife, an enigmatic Mohawk woman.

Evoking a sense of place is important to Terwilliger’s writing. In the course of researching Yet Wilderness Grew in My Heart, Terwilliger spent time living in Montreal and upstate New York, where the story takes place. While visiting the Mohawk community of Kahnawà:ke outside Montreal, Terwilliger drew inspiration from the rich resources of KORLCC, the community’s language and cultural center. By studying in the center’s library, attending cultural events, and talking with members of the Mohawk community, Terwilliger worked to deepen the perspective of his narrative.

The Starr Center’s Hodson Trust-John Carter Brown Library Fellowship supported two months of research at the John Carter Brown Library in Providence, R.I. Terwilliger took a deep dive into rare 18th-century documents, including accounts of colonists seeking possible Native American cures for syphilis, as well as an early bestseller by a counterfeiter who wrote about his crimes and adventures.

After finishing the research portion of his fellowship, Terwillger arrived at Washington College in June where—living in the circa 1735 Patrick Henry House on Queen Street and working at the circa-1746 Custom House—he is enthused to revise and refine his manuscript in the colonial surrounds of Chestertown’s historical district.

“It’s a beautiful place to write a novel about the 18th century,” says Terwilliger. “The surroundings are peaceful, spacious, and inspirational. Fiction writers don’t usually have a lot of support for archival research, and that combined with two months of writing time in a place like Chestertown, makes the Hodson Trust-John Carter Brown Library Fellowship unique and valuable.”

The Starr Center cosponsors the fellowship with the John Carter Brown Library at Brown University, one of the nation’s oldest and most prestigious institutions for the study of early America. Endowed with a major grant from The Hodson Trust, it supports work on significant projects related to the literature, history, culture, or art of the Americas before 1830. The fellowship welcomes submissions not only from traditional historians, but also from filmmakers, novelists, and creative and performing artists.  For more information, please see https://www.washcoll.edu/centers/starr/fellowships/hodson-brown-fellowship.php