Historian and author Robert Parkinson, an expert on race and war in Colonial America, will discuss the topic of his research-in-progress, America’s “Heart of Darkness” and the pivotal Yellow Creek Massacre of 1774, on Sept. 13 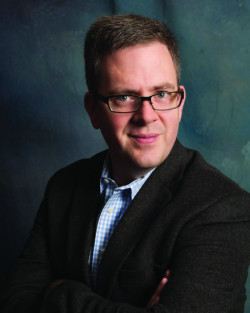 During the summer of 1774, a Marylander named Michael Cresap was accused of the grisly massacre of Mingo Indians on the banks of the Ohio River. Although mystery continues to shroud the so-called Yellow Creek Massacre, the incident touched off events that helped fuel the outbreak of the American Revolution.

On Thursday, September 13, historian Robert Parkinson will discuss the legacy of this traumatic event. Cosponsored by the Starr Center for the Study of the American Experience and the Rose O’Neill Literary House, the program is free and open to the public. The lecture begins at 5:30 p.m. in Hynson Lounge, Hodson Hall, Washington College.

Parkinson, an associate professor of history at Binghamton University whose research, writing, and teaching focus on war and race in colonial and revolutionary America, is the Starr Center’s 2018-2019 Patrick Henry Fellow. His first book, the critically acclaimed The Common Cause: Creating Race and Nation in the American Revolution (North Carolina Press, 2016), won multiple prizes, including the Organization of American Historians’ distinguished James A. Rawley Prize, awarded to the best book of the year on U.S. race relations. After earning his Ph.D. at the University of Virginia, Parkinson was a postdoctoral fellow at the Omohundro Institute of Early American History and Culture at the College of William & Mary.

During his time in Chestertown, Parkinson will be working on his new book, The Heart of American Darkness: Savagery, Civility, and Murder on the Eve of the American Revolution. The book traces the story of the Yellow Creek Massacre, along with how this horrific incident was remembered and mythologized over the next several decades. Resonating with Joseph Conrad’s Heart of Darkness, Parkinson’s book will explore the 18th-century Ohio River Valley as another “dark place of the Earth,” revealing how the discourse of “savagery” and “civility” informed the American Revolution and nation’s founding ideas.

“This is a story of empire-on-the-make, of exploitation and cruelty, of death and derangement, of a strange river that opens up lands of potential and desire, of reputations made ‘out there,’ ” Parkinson says. “Further, it is a story that weighs heavily on our clean division between who is ‘savage’ and who is ‘civil.’ ”

Parkinson will be based at college’s 18th-century Custom House on the banks of the Chester River. In the spring, he will teach a class at Washington College.

About the Patrick Henry Fellowship:

Launched by the Starr Center in 2008, the Patrick Henry Fellowship aims to encourage reflection on the links between American history and contemporary culture, and to foster the literary art of historical writing. It is co-sponsored by the Rose O’Neill Literary House, Washington College’s center for literature and the literary arts. The Patrick Henry Writing Fellowship’s funding is permanently endowed by a grant from the National Endowment for the Humanities, with further support provided by the Starr Foundation, the Hodson Trust, and other donors.