A Study of Spinal Muscular Atrophy

A psychology major with a concentration in behavioral neuroscience and a minor in public health, Madison Cole ’20 spent her summer studying spinal muscular atrophy at a research facility in Delaware. She describes her internship experience below. 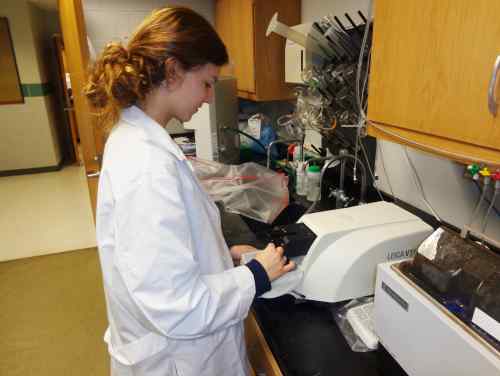 When researching summer internships, I found an interesting opportunity with the Delaware Center for Neuroscience Research. The research facility was at a college near my home so I began the submission process.  In order to complete my application, I needed a recommendation letter from a faculty member at Washington College.  I asked Dr. George Spilich to submit a letter on my behalf, and he informed me of the strong support letter he wrote for me along with some sage advice. Several weeks later, I received a letter from the director of the Center acknowledging my acceptance into the program. Dr. Spilich played a key role in my being accepted into the program.

During the summer, I spent ten weeks in an electrophysiology lab studying a disease known as spinal muscular atrophy (SMA).  SMA is a neurodegenerative disease that leads to progressive muscle weakness and eventually death. SMA predominately affects infants, making it the leading genetic cause of infant mortality.  It is caused by a mutation in a survival motor neuron gene that leads to a protein deficiency, resulting in muscle atrophy and motor neuron degeneration.

My project focused on the role of the cerebellum and motor cortex in SMA using mouse models. Generally, I observed the activity of these two brain regions in unaffected and SMA mice pups, to see if there was a quantifiable difference. To accomplish this, we used electrodes to record the activity of each region and compare the difference between typical and SMA mice pups.  My research recorded differences in neuronal activity levels that indicate there was some difference in the SMA cerebellum versus unaffected.

Spinal Muscular Atrophy (SMA) is a neurodegenerative disease that leads to progressive weakness of muscles and eventually death, predominately affecting infants, making it the leading genetic cause of infant mortality.  Mutations in the survival motor neuron gene (SMN1) cause SMN protein deficiency that leads to loss of spinal motor neurons and muscular atrophy.  While the loss of neurons in the spinal cord has been studied extensively, little is known about SMA-related neurodegeneration in other brain areas involved in voluntary movement such as the cerebellum and motor cortex.  We used an SMA mouse model to compare the spontaneous firing activity of the cerebellum and motor cortex and the membrane/synaptic properties of the output neurons in both regions between SMA and control mice.  Acute slices of the motor cortex (coronal) and cerebellum (sagittal) were prepared from post-natal 7 – 10 day old mice.  The slices were recorded on a Microelectrode Array (MEA) for network spontaneous firing activity.  Single cell neuronal membrane and synaptic properties were recorded with whole-cell patch-clamp technique.

In our preliminary results from three control mice and one SMA mouse, the MEA recordings showed an increase of neural spiking frequency in cerebellum, but not much change in motor cortex for SMA compared to control mice.  The threshold of the cerebellar output from Purkinje neurons was increased, but the peak amplitude did not change in the SMA mouse.  There was no clear change of either amplitude or threshold of layer V pyramidal neurons in the motor cortex.  The frequency of spontaneous inhibitory synaptic currents (sIPSCs) was increased in Purkinje neurons, but the amplitude did not change in the SMA mouse compared to control. There is no clear change of spontaneous excitatory postsynaptic synaptic currents (sEPSCs) in the cerebellum. In the motor cortex, both sIPSCs and sEPSCs did not change.  Our preliminary data suggest that the activity of cerebellar output neurons is reduced because of the increased activity of inhibitory neurons in SMA mice.

While we have only been able to record from cells from a single SMA mouse pup, our preliminary results show differences in the neural activity in the cerebellum.  Future experiments will focus on increasing the animal and cell numbers to get statistical significance and the mechanisms of the activity change.

This work was supported by the National Institute of Neurological Disorders and Stroke (NINDS) grant #R25NS095371 and the National Science Foundation IOS1608147.