Through a special topics course on Japanese Buddhism, students are learning the value of mindfulness and meditation to help them better navigate the stresses of college and life. 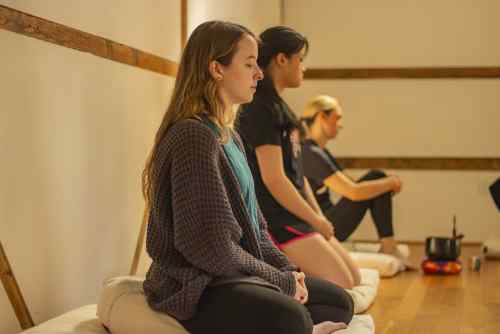 Tyanna Baker ’19, a double major in political science and economics, was having what she called “an uncharacteristically tough semester” this spring, but she found an unexpected oasis in a new class offered by Jon McCollum, chair and associate professor of music.

“This class is right between my two hardest classes,” she said of the special topics course called Performing Japanese Buddhism. “Just being in this class and being aware of mental health and meditation helps me…when you’re stressed, you think about everything. Meditation forces you to slow down and contemplate the different aspects of your life.”

Baker was among ten students who were in McCollum’s class, the second time he’s taught the course, which examines the practice of meditation but also studies more broadly the history of Japanese Buddhism and ethics from the Buddhist perspective. It also requires students to embark on a right action project that in some way gives back to the larger community.

“The class is entitled Performing Japanese Buddhism, so it’s important that they perform it in some form or another,” says McCollum, who holds a Shihan 師範 (Master’s) license in performance and teaching of shakuhachi, the Japanese bamboo flute. As a Dharma Holder in the White Plum and Sōtō-shu lineages of Zen Buddhism, he also leads a sitting mediation, or zazen, each Sunday at The Seed House in Chestertown, which several of his students join.

“I’m using the word performance very broadly here. What is the ritual like? What are the functions of the sounds that you hear in the liturgy? Why do you think those sounds, in their current manifestation, belong here? We’re asking these in-depth questions about seemingly very minute things…but all of these things matter because analyzing them is an act of mindfulness.

“What I hope that people in this class will get out of it is the idea that what we do impacts everything everywhere, all at the same time,” McCollum says. “I’m not trying to make anyone become a Buddhist, that’s not the goal of the class. I want them to be more fully aware that there are other belief systems out there and that there are other ways of thinking about our world.”

He also hopes that it will empower students with a tool that can help them reduce stress in their lives, and among the students in his class this spring, that hope seemed to be bearing fruit. Regardless of their major or their year, the students described how the class has taught them how they can slow down their intensely busy lives to become more resilient and productive.

“We have so much stress, so much work, and the fear of tomorrow,” says Jianan Li ’20, a math major who has been studying shakuhachi with McCollum for two years. Meditation “is the time we do not need to worry about anything and just be in ourselves.”

Izzy Conover ’23, a communications major with a studio art minor, said that she dealt with anxiety throughout high school. Meditation’s accessibility “is like a superpower. I get so wound up, feeling stressed out, freaking out being mad or angry,” she says. “Meditation allows you to step away … I will purposely take a walk to get to work, rather than take my car, just so that I can walk and think.”

Max Moore ’22, an anthropology major who also rows on the men’s crew team, says learning about Buddhism’s “middle way” has helped him “accept how your life is, not thinking about the past or the present, and I think that really helps with anxiety. If you stay present and focused on the now, it’s harder to fall into that state of anxiety.” Moore says that at a recent regatta, waiting at the start with his teammates, he was able to “do a quick guided meditation, like one to two minutes, to get the form down,” which helped him row better.

“I find sitting zazen really helpful because I am really stressed all the time,” says Bridget Lynne ’21, a physics and music double major who plays piano. “It’s really easy when you practice to get frustrated and angry with yourself. [Meditation] just helps clear my head and makes me more productive all day.”

McCollum says studying Buddhism encourages students to understand the interconnectedness of everything and everyone, which inspires a broader, more empathetic community as a whole.

“The goal that I have is to spread more compassion throughout campus so that everyone can look with eyes that see, ‘We do not walk in the same shoes,’ ” McCollum says. “Still, we’re not separate. We are interconnected and each of our actions have consequences to all.”