Faculty Focus: Fine-Tuning on the Farm

Through multiple research projects in collaboration with the University of Maryland Center for Environmental Science’s Horn Point Laboratory, Rebecca Fox, assistant professor of environmental science and studies, is helping farmers and scientists better understand the effectiveness of best management practices that are critical to the Chesapeake Bay’s health. 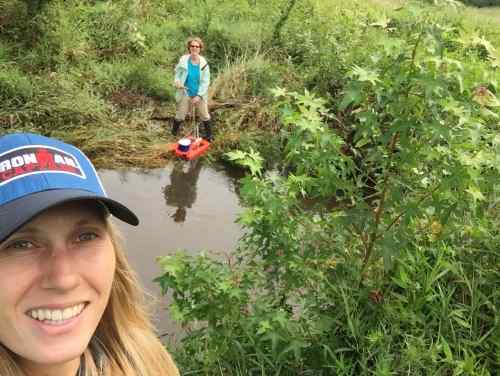 When she set out to be a scientist and teacher specializing in greenhouse gases, Rebecca Fox didn’t expect to be posting flyers at gas stations and laundromats or going door-to-door recruiting local residents to participate in her work. But connecting with those whose livelihoods depend on farming has been key to research that Fox and fellow scientists have been conducting in Caroline County evaluating best management practices in agriculture, a critical element to the overall health of the Chesapeake Bay.

It’s one of several projects that Fox, assistant professor of environmental science and studies, is conducting on the Choptank River and its tributaries, all related to better understanding the effects—positive and negative—of best management practices (BMPs) farmers use to limit nutrient and sediment runoff into the Chesapeake. Two of the projects also involve Erika Koontz ’17, an environmental studies major who had worked with Fox on her senior thesis and who, since last summer, has been a faculty research assistant at the University of Maryland Center for Environmental Science’s (UMCES) Horn Point Lab in Cambridge.

“I have a lot going on,” Fox says, “but it’s all collaborative, and the topics are very interconnected.”

Fox began the oldest project, a five-year grant that’s coming to a close this fall, while still a post-doctoral researcher at Horn Point, led by her then-faculty advisor, UMCES Professor Tom Fisher. Since 2013, they have been monitoring four small Choptank tributaries where, with a few exceptions, water quality has been stagnant or declining in terms of nitrogen and phosphorus, despite farmers’ implementation of BMPs. If they could get more BMPs such as cover crops and controlled drainage structures in place, they wondered, would they be able to pick up changes in water quality in the streams?

Tangentially, they and other researchers at Horn Point studied the social science involved, knocking on doors, giving talks at churches and libraries, and going to local tax ditch meetings, all to meet more residents and farmers to learn how they felt about BMPs—how hard or easy they were to implement, and why.

“From my original training, as a scientist, I just thought about water quality in terms of nutrients. I wasn’t thinking about it being fair or the social aspect of it,” she says. “The first-year surveys basically showed that the two main impediments to BMP adoption—which probably aren’t a shocker—are money and time. It takes time to fill out the paperwork, it takes time to actually do it, it takes time to maintain it.”

A single controlled drainage structure in a farm field ditch or tile line, which slows runoff so that the ditch or tile line acts more like a wetland, can cost between $2,500 to $25,000, depending on the size. Although the state will pay 87.5 percent of the cost, the farmer still has to come up with the remainder.

“So it doesn’t always make economic sense to do it,” she says. “You need to balance the environment with the sociology—people—as well as the economics of the system.” Working to help farmers find more funding, the team was able to put one entire tributary watershed into cover crops for the winter, and added more drainage control structures throughout.

“We’re at this point now where we have BMPs on the ground, we’re monitoring water quality and we’re just waiting to see the story unfold,” she says. “Hopefully in the next year we should have some more conclusive answers—is it working, is it not working, where do we need to put more research?”

Fox also uses this project to take her students into the field to monitor greenhouse gas fluxes—one of the unintended consequences of slowing water down. “We can go out and see the sites, we have this huge dataset behind them, and what they’re doing in class is very similar to what we will do in the field, and it’s directly applicable to projects they might be hired to do when they graduate.”

Fox is also second author on a newly published paper in Agriculture, Ecosystems, and the Environment (https://www.sciencedirect.com/science/article/pii/S0167880917305182 )

resulting from another project analyzing the impacts of different BMPs on nitrate runoff, greenhouse gas emissions, and crop yield. The three-year project included asking a farmer to apply 20 percent less fertilizer or applying a winter cover crop and measuring the effects. Working through one year of drought that was relieved by the deluge of Hurricane Sandy, they finally had a “normal” weather year.

“With the 80 percent treatment, we saw quite a substantial loss of yield. And we did see less nutrient fluxes, but when you see that kind of impact on yield it’s not a solution,” she says. “The cover crops did impact in terms of nutrient leaching, but with greenhouse gases it wasn’t as clear a story. Some years we saw significantly less gases fluxing, other years we did not.”

A third project, for which she was awarded funding after coming to Washington College, though she’s still collaborating at Horn Point and with scientists from UMD’s Center for Environmental Science’s Appalachian Laboratory, is measuring the effects of controlled drainage structures. The four-year project is taking place at a single farm in Caroline County where two ditches are free-flowing and two are flooded by the controlled drainage structures.

“We’re looking very specifically at that management practice to see if you put this in place, do you actually see an improvement in water quality going downstream, but do you also see an increase, like a pollution tradeoff, of greenhouse gases fluxing to the atmosphere.”

“These research projects are important because it is critical to manage the impacts of agriculture while also maintaining the viability of local agriculture,” Fox says. “Hopefully these projects will provide evidence as to how to improve water quality in our region without further causing climate change.”