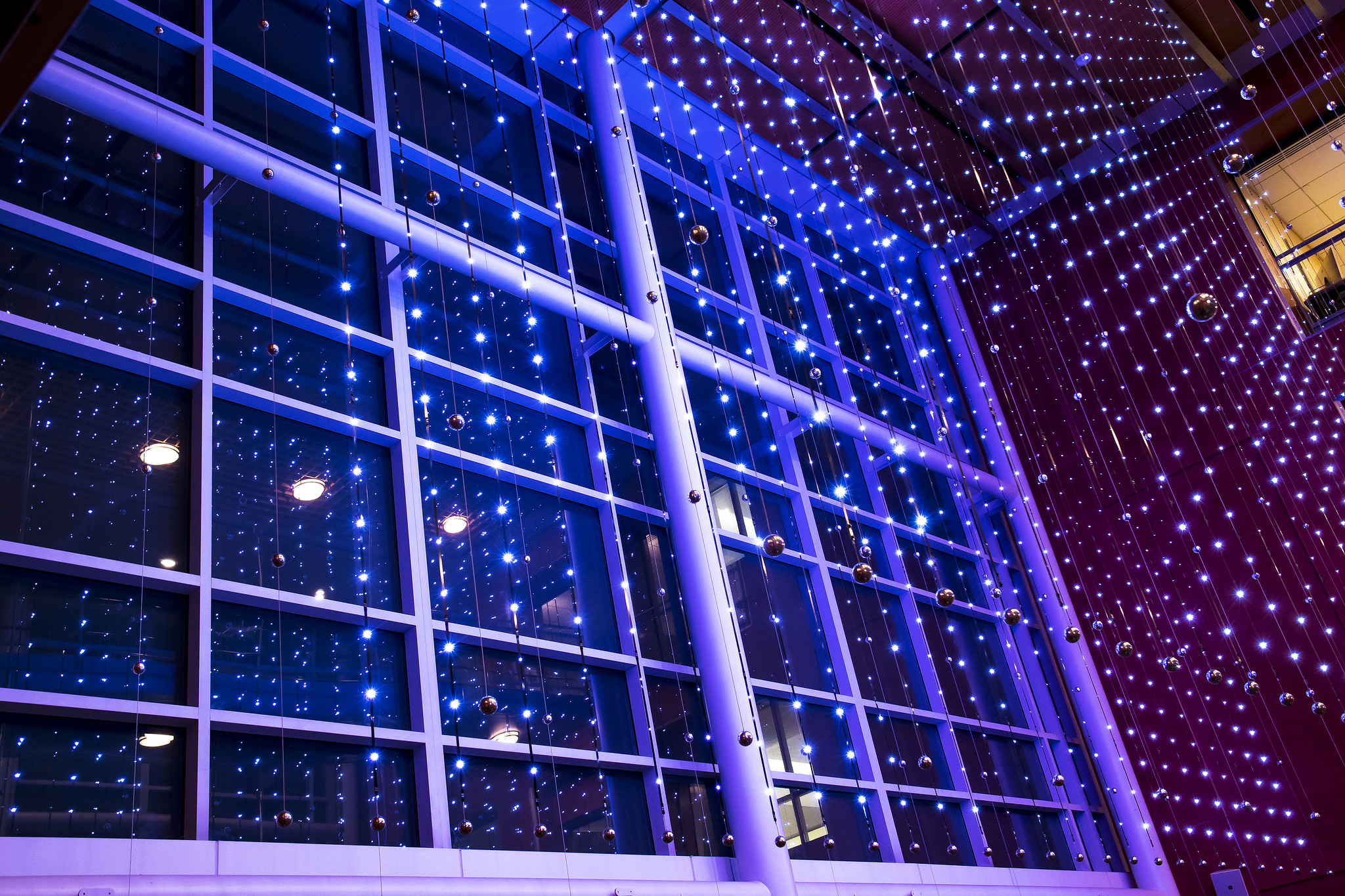 For decades, Washington College was the center of American pyrotechnics teaching and research. “Radiant Echo,” an arresting art installation in the three-story McLain Atrium of the John S. Toll Science Center, honors the two WC professors and alumni who made it so. 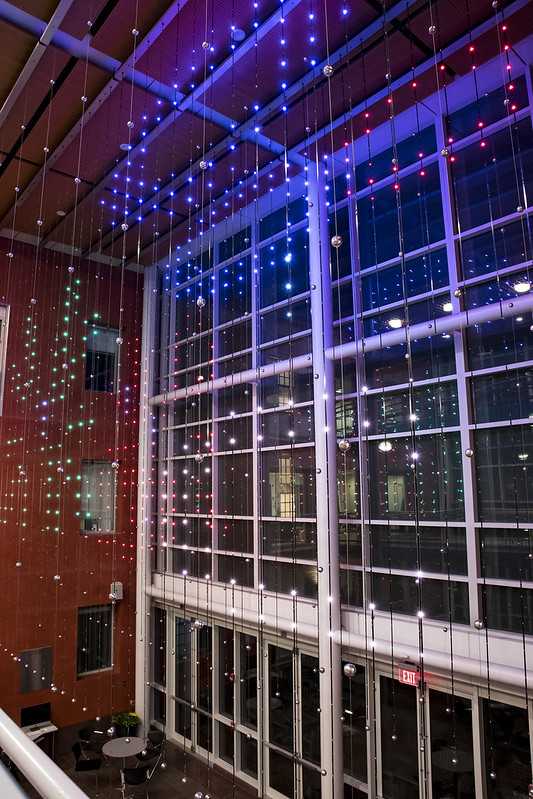 Radiant Echo, an illuminated, choreographed sculpture installation fashioned by Flux Studio of Baltimore, was unveiled in October 2019. Comprising 78 strands suspended from aluminum channels in the atrium ceiling, the artwork is 27 feet tall and 31 feet wide. It features 286 reflective orbs and 3,640 computer-programmed LED lights that display a series of dynamic sequences.

In its default, “quieter” state during most of the day, Radiant Echo is programmed to burst into  its five active states, cycled randomly, beginning near sundown.

Shrum describes one, “axial shimmer,” as “glittering columns and [a] prismatic array of colors [that] respond to prominent architectural features” in the atrium. Another active state, “exploding stars,” has “a color palette that references metallic salts commonly used in the production of [fireworks] stars…. [T]his show follows the process of [pyrotechnic] explosion from lift to ignition to burst.”

Faculty use the sculpture to illustrate principles of physics, chemistry, art, psychology, and computer programming.

Radiant Echo honors the lives and legacies of former Professor and WC President Joseph H. McLain ’37, his wife Ann H. McLain ’40, Emeritus Professor John A. Conkling ’65, and his wife Sandy Conkling ’65. McLain’s and Conkling’s far-reaching contributions to the College and the fireworks industry stretch over more than 70 years.

McLain taught chemistry at the College from 1946-81, was the W. Alton Jones Chair, and was president from 1973-81. The author of “Pyrotechnics from the Viewpoint of Solid-State Chemistry” (Franklin Institute Press, 1980), he held more than 30 patents. He helped develop rocket propellants and pyrotechnic actuation devices for state separations in space flights. McLain was a founding member of the National Council on Fireworks Safety.

Conkling began his WC career as McLain’s student and returned to teach chemistry in 1969 upon finishing graduate school. He has authored “Chemistry of Pyrotechnics: Basic Principles and Theory” (CRC Press, 1985, 2011, 2019) and “Boom! America’s Ever-Evolving Fireworks Industry” (Whitman Publishing, 2017) and holds eight patents. Having become involved in the leadership of the American Pyrotechnics Association (APA) in 1972 at McLain’s urging, Conkling has been the APA’s executive director and technical director. He is in frequent demand by media worldwide to discuss all aspects of fireworks.

The work for Radiant Echo began as a project of Sandbox, which was supported by a grant from The Andrew W. Mellon Foundation. Its installation was funded by private donations from WC alumni and friends of the McLain and Conkling families. Donations for its maintenance and possible future programming are welcome.