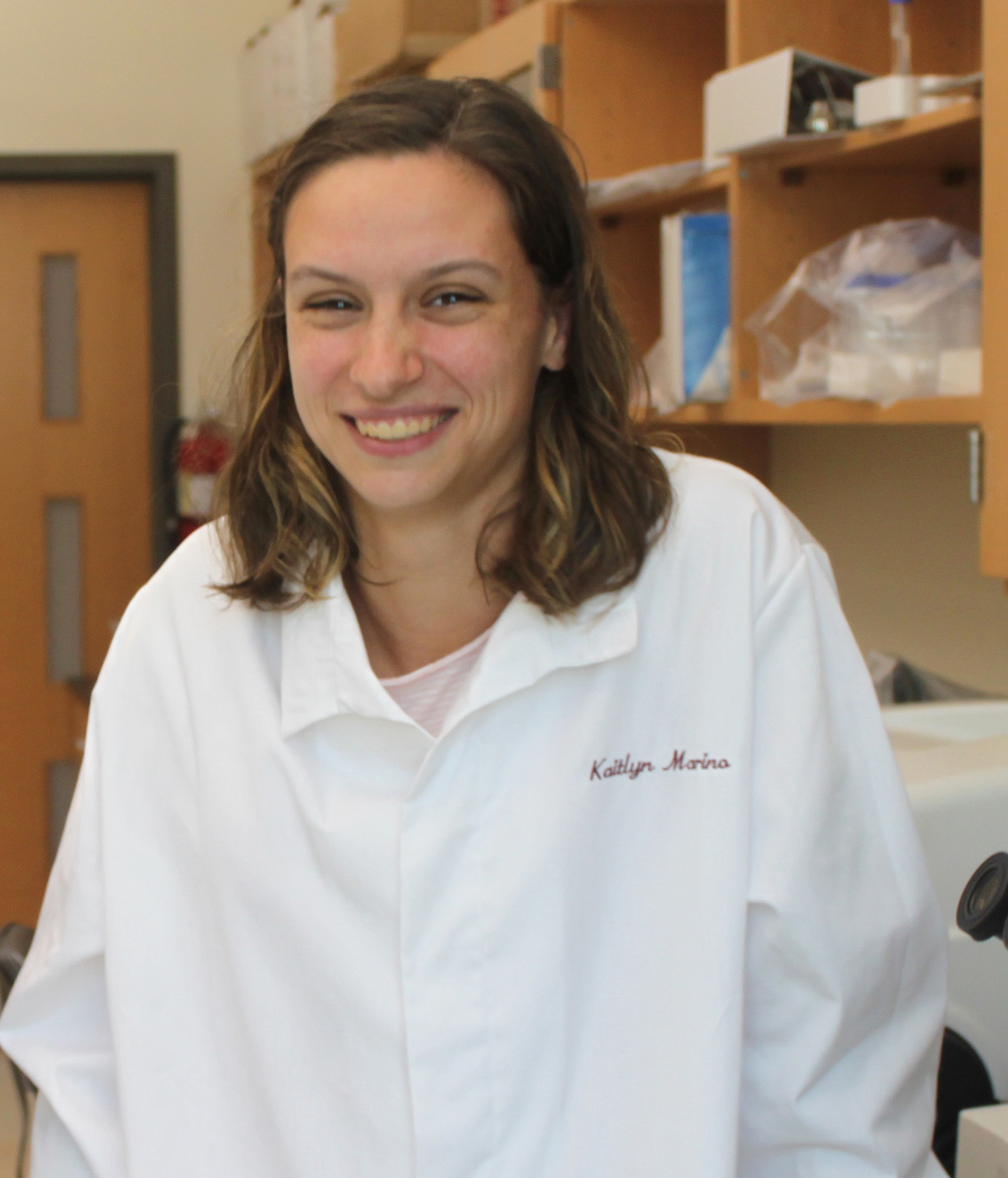 A John Toll Fellow who conducted neuroscientific research on campus, Kaitlyn Marino ’19 used a zebrafish model to test memory after stroke.
A zebrafish egg looks like nothing more than a tiny bubble of carbonated water, but this translucent organism contains a world of hope for the scientific research community investigating how to treat stroke in human patients.
Kaitlyn Marino ’19, a dual major in biology and psychology with a concentration in behavioral neuroscience, is part of that community. In the lab of her faculty adviser, Assistant Professor of Biology Jim Windelborn, she carefully collected fertilized eggs from the bottom of a narrow fish tank she and Windelborn built specifically for this summer research project meant to establish that, in fish, hypoxia affects memory. Working under a microscope and using a microinjector, Marino inserteda single strand of DNA into the embryo and returned the eggs to the tank, where they then grew into adult zebrafish whose cells have been genetically altered to express a specific protein.
As part of the experiment, she and Windelborn introduced their subjects to hypoxia—mimicking the oxygen deficiency that stroke victims experience when a blocked artery disrupts the flow of blood and oxygen to the brain. Then they ran a series of behavioral assays to look at memory and how it is affected by ischemic stroke. Using a novel object recognition test, Marino introduced an object into the tank—in this case, toy Smurfs—right before the fish have hypoxia. A day later, in fully oxygenated water, the fish were introduced to that object again, along with a new object.
“The idea is, we’re seeing how much time they spend with the novel object versus what is considered a familiar object,” Kaitlyn explained. “We’re also looking at how brain tissue is affected 24 hours post-hypoxia.”
It’s part of a long-term project that can help identify different protein targets and drugs that can bind with those proteins, Windelborn says.
“We are generally bad at treating strokes. There isn’t a whole lot to do after the fact,” says Windelborn, who studied the cellular and molecular bases of neurological traumas and neurological diseases as a doctoral student at University of Wisconsin, Madison. “What’s important is to identify new targets.
Right now, we’re pretty far away from the clinic, but we’re finding that zebrafish offer a good model for identifying possible therapeutic targets.”
For Marino, this was her second summer in the Windelborn lab working on a zebrafish model for ischemic stroke that will also form the basis of her senior capstone project. She intends to pursue a doctoral degree in neuroscience and a career as a research scientist.
“I like the kind of research we’re doing now where you have a big thing you are looking at—in our case, behavior—and we’re really targeting something cellular, so that’s where my interest comes from,” says Marino. “You can see more of a cause and effect. I like cellular pathways—the idea of linking biology to behavior.”
Kaitlyn is now a PhD student in the neuroscience training program at the University of Wisconsin, Madison. She is supported fully by a training grant that allows her to explore research in multiple
laboratories before committing to a lab for her dissertation research. The labs through which Kaitlyn has chosen to rotate have a focus on the mechanisms of the brain’s recovery from traumas such as seizures and strokes.