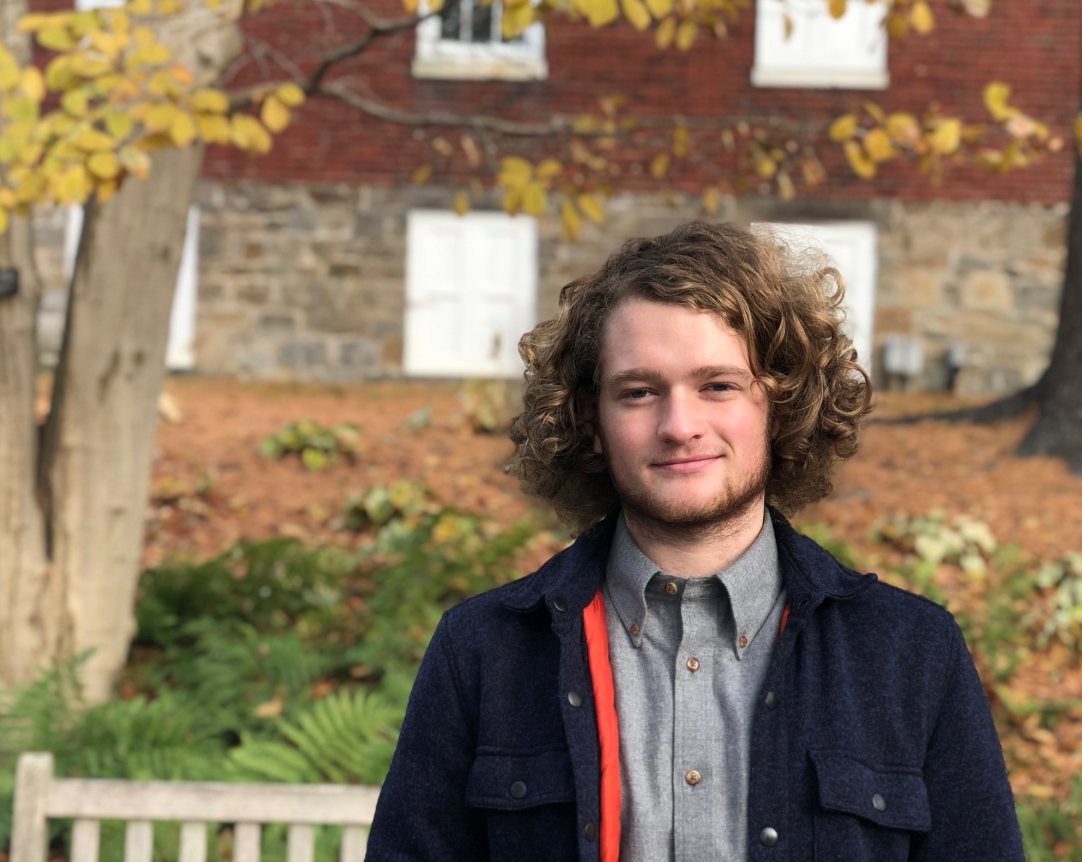 Evan McCarthy ‘22 never believed mathematics was part of his realm of possibilities, now in his second year at Washington College, that’s all changed.

“My first semester introduced me to the computer science department, which also introduced me to the math department. As I got to know all the professors and students, I started gravitating toward math– despite my less than pleasant history with it,” he says. “Discrete mathematics challenged me to think critically and creatively; it fundamentally changed the way I look at mathematics. I use what I’ve learned in the course over and over. It is the class that pushed me to take a leap of faith into declaring both a math and computer science major.”

Evan is a young creator. He hopes to dive into a career that allows him to solve problems creatively and to see the impact of his work; perhaps even creating the software that powers the next generation of connected devices. The skills Evan is building through the math and computer science department far surpass proving “2+2=4”.

“The math and computer science department and every faculty member in it have made enormous impacts not just on my knowledge of the topics they teach, but of so much more. I’ve learned how to push through daunting problems–but also to know when to stop– and how to have honest discussions instead of arguments in a time where we seem to lack them.”

Evan’s relationships with his professors extend beyond the department. He is music stand partners with his advisor Prof. Kyle Wilson, Assistant Professor of Mathematics and Computer Science, in the WC Orchestra, where they both play the violin!

“I’m surrounded by people that want to help me better myself and succeed. It’s changed the way I think, the way I look at and critique the world. I’ve been shown how to use different perspectives for not only my work, but also my life. WC has given me a chance to show what I’m capable of.”

As a member of the Makers Union, Evan is able to expand upon his creative problem-solving abilities. For the first time ever, with Evan at the helm of the 18-foot “Erged On,” WC’s Student Electric Boat Racing Team was victorious at the 19th annual Wye Island Challenge Electric Boat Marathon in October 2019, winning the Monohull-Advanced Batteries class. This was the WC team’s third year racing and first year completing the race—a challenging course that includes eight miles of open water of the Miles River as well as 16 miles around Wye Island.

For battery power, students built a 48-volt Lithium Ion battery pack assembled from cells like those found in a laptop or Tesla EV. They also harvested solar power with a 975-watt array, which extended range and speed. The team is already planning the next phase, including designing autonomy and power management systems that adapt in real-time to wind, current, and solar conditions. A larger boat built from scavenged rowing shells is also in planning that could carry more solar panels and provide a more stable ride.

Evan has a long way to go until graduation, but Washington College has already made a lasting impact on this creative thinker.

“Washington College reignited a passion for learning I had lost; I will leave WC with an intense curiosity and the tools to fill that need. I’ll be bringing meaningful knowledge, critical thinking, original experiences and a passion for problem solving that I’ll be able to use for whatever comes after senior year.”

“Discrete mathematics pushed me to take the leap of faith into a math major. The course challenged me to think critically and creatively, even with the strict rigidity that things like mathematical proofs. It fundamentally changed the way I look at mathematics. I use what I’ve learned in the course over and over since I’ve taken it.”

Looking Forward ToGetting Out of My Comfort Zone

“I’m looking forward to more complex and theory-based math courses and diving deeper into the whole picture of what you can do with modern computers. I’m excited to get my name out there with internships and research, but I’d still like to take at least a semester to get out of my comfort zone and study abroad.”

“I want to do a project that improves something. I want the work that I do for my SCE to make the same impact that the college has on me. I want to do something that will make a continuous impact. I’m not sure what that will look like yet, but I know when I find it, I’ll be prepared with the skills to make it happen.”