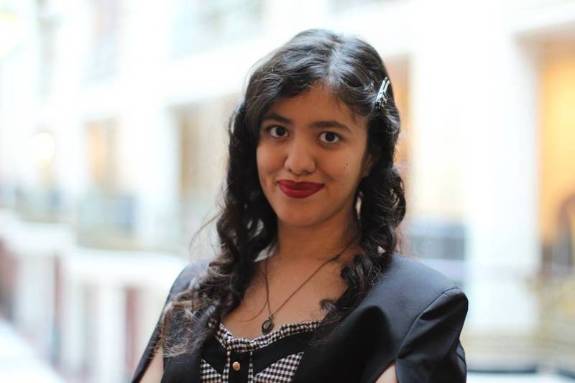 A Way with History

A double major in history and French studies finds her calling in museum work.

Maria Betancur’s search for colleges with exceptional history programs led her right to America’s oldest chartered college. But even her professors at Washington College could not have predicted the extraordinary experiences this Colombian-born woman would have—a summer internship at the Smithsonian’s Luce Foundation Center for American Art funded by the Starr Center’s Explore America internship program, a fully-funded trip to study at the American University of Paris, and a double major in history and French studies that would culminate with two senior capstone projects exploring France’s complicity in the Holocaust and the government’s brutality against Algerian protesters rallying for independence in 1961.

Since her freshman year, Betancur has known she wanted to work in museums. Her experience at the Smithsonian’s Luce Foundation for American Art solidified her commitment to museum work and narrowed her field of interest to public programming and education. That summer, she led sketching groups, helped out with the concert series, and created her own 30-minute tour about three lesser-known 19th-century artists.

Her career options have now expanded to include museum work abroad.

In 2019, Maria became Washington College’s first recipient of Pi Delta Phi’s prestigious Yedlicka Scholarship, awarded by the national French honor society to just four exemplary college students who want to study in France or Canada. The scholarship covered the cost of tuition, room and board, and most travel expenses for the six-week summer program.

During her trip, in addition to exploring Les Invalides where monuments to France’s unsavory military history are tucked away, Maria visited the Eiffel Tower, spent her birthday at Monet’s home in Giverny, and walked every inch of the Louvre.

“I took an art history class, ‘Paris Through Museums,’ that never met in a classroom. We were always out in the museums,” Maria says. “I saw pretty much all of the Louvre, which is impossible if you are just on vacation.”

A first-year seminar gave Maria a glimmer of her future career path. In partnership with the Smithsonian Institution’s Museum on Main Street project and Summer Hall, students in this class helped develop exhibits and educational programs that highlighted local labor history, with a special emphasis on the experiences of African Americans in Kent County. Maria had found her calling.

Through the Starr Center’s Explore America summer internship program, Maria solidified her commitment to museum work and narrowed her field of interest to public programming and education. She led sketching groups, helped out with the concert series, and created her own 30-minute tour about three lesser-known 19th-century artists.

With scholarship funding from Pi Delta Phi, the national French honor society, Maria spent six weeks at the American University in Paris. As part of an Art History class, she says, “I saw pretty much all of the Louvre, which is impossible if you are just on vacation.” And she focused on improving her fluency in a class on French Immersion and Culture.

As a double major in history and French studies, Maria developed two senior theses focused on France and World War II. During her trip abroad, she visited several significant sites, including the museums and monuments of Les Invalides relating to France’s military history. Her visit to the Holocaust Museum and Memorial “absolutely devastated me.”