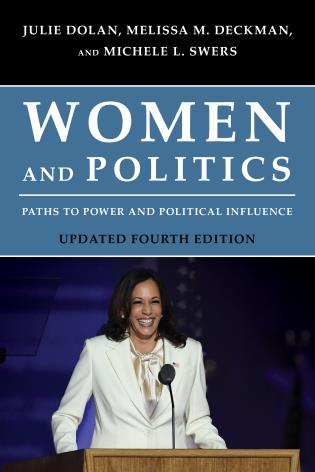 Professor and Chair of the Political Science Department
When Dr. Melissa Deckman began teaching a course on women and politics back in 2001 at Washington College, there were few comprehensive textbooks about the state of women in American politics, as the gender and politics subfield within political science was just beginning. Discussing this problem at a political science conference in Chicago with Dr. Julie Dolan, a friend from graduate school and a professor at Macalester College, together they hatched a plan to write a new textbook. Bringing in another young scholar from Georgetown University, Dr. Michele Swers, they wrote their first edition of Women and Politics in 2007.
Jump ahead 15 years, and Women and Politics is now in its updated 4th edition with Rowman & Littlefield. One of the leading college textbooks on women in American politics today, their book considers women as political candidates and leaders across a range of political offices, both elected and appointed. Their textbook also considers the evolving nature of the gender gap in public opinion and examines the role of women as political activists, providing students both a history of women's political engagement but also an analysis of why women remain underrepresented as political leaders in American politics.
Updating this textbook has been a true labor of love for Dr. Deckman. "Writing a book with two good friends who are also active gender and politics scholars has been one of the most rewarding professional experiences of my career," she says. All three authors consistently test their material with their own students, looking for new ideas to improve the book. Although the explosion of scholarship in the area of gender politics sometimes makes it a challenge to keep up with all of the new developments in this area, Deckman says that all three authors are truly excited about how far the field as come since they began researching women and politics as grad students more than two decades ago.
Even more exciting has been the historic advancements that women have made as political candidates during the last two election cycles, including, of course, the election of the nation's first female Vice President, who graces the cover of this newest edition.  Nonetheless, roughly 3 in 4 members of Congress are men and women remain underepresented in all types of elected offices.  It is Deckman's hope that her book will inspire more young women to become active in politics in the future, even considering a run for office themselves.
For more informtaion on her book, visit this link.