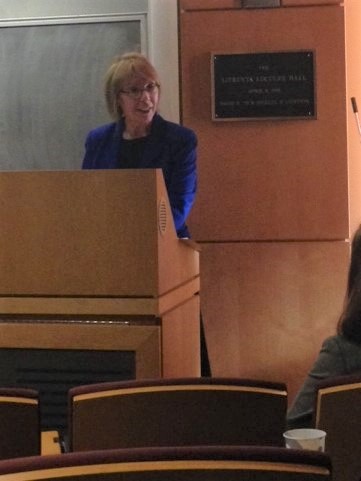 Dr. Janet Sorrentino came to Washington College in 2000 from Chapel Hill, North Carolina where she obtained her PhD in Medieval History, with a concentration on intellectual and religious history, including history of science and medicine. She earned her B.A. with certification to teach History and French from Southern Methodist University in Dallas, Texas, and a Bachelors of Science in Nursing from UNC-Chapel Hill. She worked as a registered nurse in both ICU and Home Health Care settings before returning to graduate school to study history.

At Washington College, Sorrentino teaches courses in Medieval and Early Modern history such as Early Islamic Civilization, Empire and Papacy: Medieval Germany and Italy, and Castles, Cloisters, Cathedrals and Mosques of France, Renaissance, Reformation, and Ancient Rome. She also initiated a revision of the introductory history curriculum to enhance student interest in history and provide deeper training in the skills. Her introductory course—“Harry Potter’s World: Renaissance Science, Magic, and Medicine—draws on the manuscript collection of the National Library of Medicine in Bethesda, MD.  Her students learn early that her enthusiasm for history and the life of the mind is paired with her absolute commitment that they find ways to do their personal best, whether in her classes or in their other pursuits.

Sorrentino researches the intersection between religion, particularly ritual or liturgy, and intellectual and social aspects of civilization. She became fascinated with the way historical groups—whether kingdoms or monasteries or religious sects—invested the very best of their resources into worship. From beautiful architectural monuments to book production to musical invention to the equivalent of medieval “think tanks” or philosophical schools, ritual often stood at the center of innovation. Those very expressions of worship, however, because they usually represented specific dogmatic beliefs, also became the center of social conflict with others who did not share those beliefs. Her early publications concentrated on the ritual of European monastic communities, particularly the Order of Sempringham in England, where liturgical innovation combined with an unusual community organization with women and men in the same order. Her research has taken new direction in the writings of medieval and early-modern Muslim travel writers in order to examine their observations of ritual spaces and activities in the many countries they visited. Although her work focuses on pre-modern writers, the study is especially relevant now to an understanding of the current Islamist movements. The purist aesthetic of those movements is often grounded in a particular approach to interpreting the law (fiqh) governing worship and social life, an approach not shared by most of the Muslim travel writers.

Sorrentino has been invited to lecture on the history of science and medicine in a number of settings. She has given two series of lectures about the History of Medical Technologies for the Staff College of the Food and Drug Administration. As keynote speaker, she gave the lecture  “Alchemy, Transformations, and Secret Chivalric Orders” for Kent County MD Public Library’s exhibition Harry Potter’s World: Renaissance Science, Magic, and Medicine, a six-banner traveling exhibition that uses materials from the National Library of Medicine to explore Harry Potter’s world and its roots in real-world Renaissance practices.

She has two wonderful daughters who have flown the nest, but when they are home, the three of them love to cook, bicycle, and read in their hammocks. In addition to her time devoted to history, Sorrentino can be found in her garden where weeding, planting, digging, and designing have become a metaphor for her research. She also loves to sing at the top of her lungs when no one is listening except her poor cat.