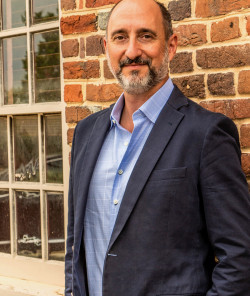 Adam Goodheart, the Starr Center’s director, is a historian, essayist, journalist, and New York Times bestselling author. His book 1861: The Civil War Awakening (Knopf hardcover, Vintage paperback) received widespread acclaim; a front-page review in the New York Times Book Review called it “exhilarating,” “inspiring,” and “irresistible,” adding, “1861 creates the uncanny illusion that the reader has stepped into a time machine.” A national bestseller in both hardcover and paperback, 1861 was a finalist for the Los Angeles Times Book Prize in History and was named Book of the Year by the History Book Club. It was also cited among the best books of 2011 by The New York Times, The Atlantic, Kirkus Reviews, Slate, Amazon, and Barnes & Noble. President Barack Obama invited Goodheart to the Oval Office to recognize 1861’s role in having Fort Monroe – where part of the book is set – declared a national park.

As a historian who believes that intellectually serious work can speak to wide audiences beyond the academy, Goodheart often seeks intersections between the past and present. His articles and book reviews appear frequently in the The New York Times, (where he also served as deputy editor of the Op-Ed page), National Geographic, Smithsonian, The American Scholar, the Washington Post, and other publications. His broadcast appearances include CNN, MSNBC, the History Channel, and National Public Radio (“Fresh Air,” “Morning Edition,” “All Things Considered”). His work has been widely taught and anthologized, including in the 11th, 12th, and 13th editions of The Norton Reader.

Among his scholarly honors, Goodheart is the recipient of a National Endowment for the Humanities Public Scholar Award (2017), a Distinguished Lecturer of the Organization of American Historians (2014-20) and an elected member of both the Society of American Historians (2016) and the American Antiquarian Society (2010). He has lectured at the Smithsonian, the National Archives, the Library of Congress, Harvard, Yale (Poynter Fellow in Journalism, 2012), the National Constitution Center, the National Council for History Education (keynote speaker, 2013), the American Association for State and Local History (keynote speaker, 2012), and many other venues.

In 2006, after several years as a part-time scholar-in-residence at Washington College, Goodheart was appointed Director of the College’s Starr Center for the study of the American Experience. The position was endowed by the Hodson Trust later that year as the Hodson Trust-Griswold Directorship. Under his leadership, the Starr Center has focused on exploring new approaches to America’s past and present, on fostering the art of historical writing, and on opening doorways to on- and off-campus opportunities for Washington College students. The Center is interdisciplinary and works with faculty and students in a broad range of academic departments.

During Goodheart’s tenure, the Starr Center was awarded a $2.5 million grant from the National Endowment for the Humanities, the largest federal grant in Washington College’s history. He forged partnerships with the Smithsonian on the American Pictures Distinguished Lecture Series and the Chesapeake Heartland project, and with the New York Times on the “Historically Corrected” series of columns, created in collaboration with Washington College students. New annual writing fellowships bring nationally distinguished authors to live in Chestertown and teach at the College. Starr Center student fellowships at leading museums, libraries, and cultural institutions – across the U.S. and overseas – award fully paid summer positions to outstanding Washington College undergraduates in many different fields.

Goodheart has taught and co-taught Washington College courses in American Studies, English, History, Anthropology, Theatre, and Art, as well as in the freshman seminar program. As a teacher, he believes in working collaboratively with his students on projects that take them beyond the classroom, contributing in tangible ways to scholarly knowledge, public awareness, and general awesomeness.

“With Pen and Passport: The Writer as Traveler”

“Making History: How Writers Bring the Past to Life”

“American Roots: Jamestown, the Chesapeake, and a Nation’s Global Origins”

“Making Place: Searching for Somewhere in the Age of Anywhere”

“Finding the 400: A Revolutionary Mystery”